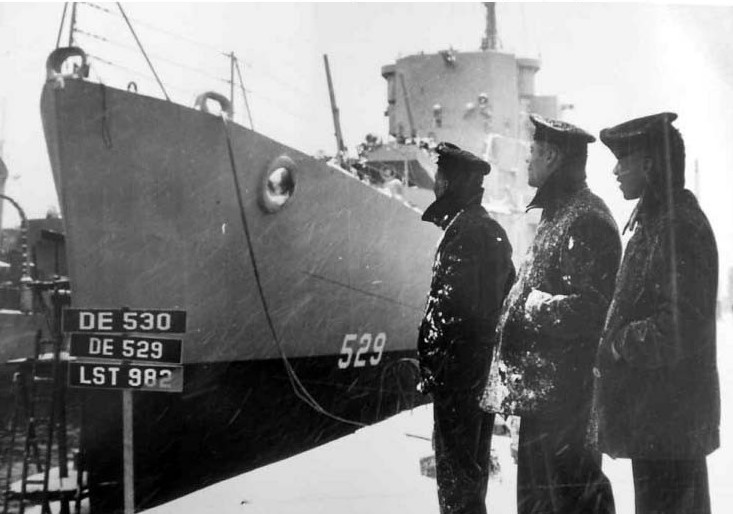 Crew Members Beside the USS Mason in Boston Harbor, 1944 (US Navy)

The USS Mason (DE-529) was an Evarts-class destroyer escort and was the second ship of the U.S. Navy to be named Mason. The USS Mason was one of the two U.S. Navy ships during World War II with a mostly African American crew. The other ship was the USS PC-1264, a submarine chaser. Out of a crew of 204, 160 of the sailors on the Mason were African American. During the first two years of U.S. participation in World War II, African Americans in the Navy were limited to positions as cooks, stewards, and manual laborers – but by 1943 they were allowed to become regular combat sailors. African American sailors, however, still received their training at a segregated training facility, Camp Robert Smalls, part of the Great Lakes Naval Training Station in Illinois.

The USS Mason’s name came from U.S. Navy fighter pilot Newton Henry Mason, who was killed in action at the Battle of the Coral Sea in May 1942. Mason was buried at the Boston Navy Yard in Boston, Massachusetts, on October 14, 1943, and 33 days later, on November 17, 1943, the ship was launched. On March 20, 1944, it was commissioned with Lt. Cdr. William M. Blackford in command.

On March 31, 1944, the USS Mason got its first trial run, but a day later, Blackford indicated in the ship’s log that the ship was not ready for service. After repairs on April 9, 1944, the ship departed from Boston for Bermuda. On April 11, 1944, it arrived at Bermuda but left on May 15 for a return voyage to the Boston Navy Yard.

On June 14, 1944, the Mason left Charleston, South Carolina, on its first combat mission, escorting a convoy bound for Europe. The convoy reached Portugal on July 6 and Belfast, Northern Ireland, on July 26, 1944. It then returned to Boston Harbor on August 2, 1944, where it engaged in convoy duty in other areas of the Atlantic. On October 18, 1944, the Mason protected Convoy NY-119 as it sailed through a North Atlantic storm. Despite the ship suffering damage, its crew rescued crew members on other vessels in the convoy.

On December 17, 1944, the USS Mason joined Task Force 64 at Norfolk, Virginia for service in the Mediterranean Sea. On January 11, 1945 the Mason made radar contact with a presumptive German submarine off the coast of Algeria. It dropped depth charges and then when the vessel surfaced, attempted unsuccessfully to ram it. Although the Mason continued its escort duties, this was the only encounter with an enemy submarine during its short service. After World War II ended, the ship was decommissioned on October 12, 1945. On March 18, 1947, it was sold by the U.S. Navy and delivered to New Jersey for scrapping.

The contributions of the mostly African American crew with the Mason were largely ignored and forgotten until the 1990s, when Secretary of the Navy John Dalton awarded the ship’s surviving veterans long overdue commendations. The Mason’s story has been the subject of books and movies, including the 1995 book Proudly We Served: The Men of the USS Mason by Mary Pat Kelly and the 2004 documentary Proud.