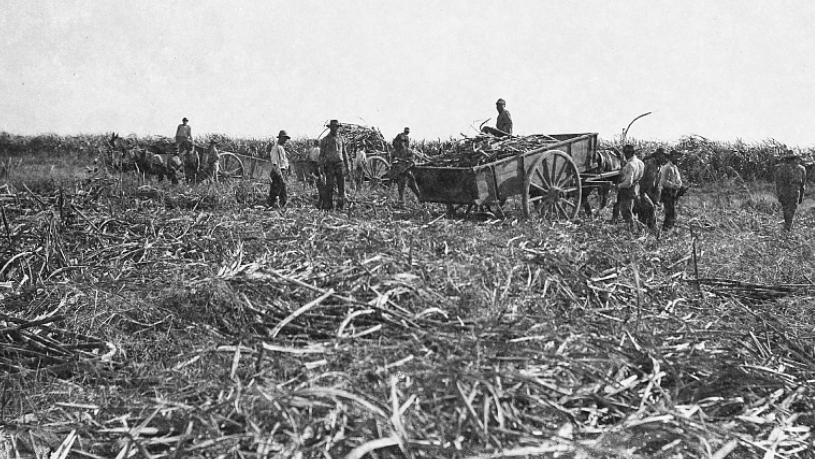 The Thibodaux Massacre took place in Thibodaux, Louisiana on November 23, 1887. Black sugar cane workers, determined to unionize for a living wage, chose to combine their minimal power during the crucial harvest season. Instead, their actions sparked a massacre.

With echoes of the bondage their ancestors had experienced during slavery, the cane workers protested the harsh working conditions, long hours, and starvation wages. They were fed subsistence meals and paid as little as 42 cents a day with scrip which could only be used in plantation stores.

The Knights of Labor, one of the few labor unions to organize blacks, encouraged the sugar cutters to demand better treatment and $1.25 a day in cash. The Knights had tried unsuccessfully to organize the workers in 1874, 1880, and again in 1883 but had been blocked all three times. But the cutters thought the results might be different in 1887, when the Knights urged them to wait until the rolling season was almost underway to propose making a stand. During the rolling season, there was a narrow window of time to harvest the cane and unlike with cotton growers, the planters were unable to attract enough strikebreakers from out of the area because of the low pay they offered. With this strategy in mind, Junius Bailey, a 29-year-old schoolteacher and the president of the Terrebonne chapter of the Knights of Labor, went directly to the growers with the sugar cutter’s demands.

When the growers refused to negotiate and fired the union members on November 22, the strike was called and for the next three weeks an estimated 10,000 workers (the largest such action in the farming industry) went on strike, affecting four parishes: Lafourche, Terrebonne, St. Mary, and Assumption.

Meanwhile, white vigilantes locked down Thibodaux and went door to door attempting to identify strikers and demanding passes from any blacks going in and out of town. As morning broke on November 23 shots rang out from a cornfield and two white guards were injured. At that point, the massacre began.

The planters persuaded Governor Samuel D. McEnery, a Democrat and former sugar planter, to unleash several units of the all-white state militia. Commanded by ex-Confederate General P.G.T. Beauregard, the militia brought a .45 caliber Gatling gun while the paramilitary groups set up outside of the Thibodaux courthouse. Both the militia and white vigilantes went door to door shooting suspected strikers and those unlucky enough to cross their path.

The indiscriminate killing left approximately 60 people dead. The bodies of many of the strikers were dumped in unmarked graves. Those who survived hid in the woods and swamps as the killings spread to other plantations.

Although the Thibodaux Massacre was one of the deadliest episodes in United States labor history, the Southern white press heralded the action of the militia and vigilantes. Sugar planter Andrew Price, who participated in the attacks, won a seat in Congress in 1888. Statues were erected and public areas named after many involved in the unlawful killings while the workers, including women and children, went anonymous, their murders marked only by their loved ones. Black farm workers did not attempt to unionize in earnest again until the 1930s.