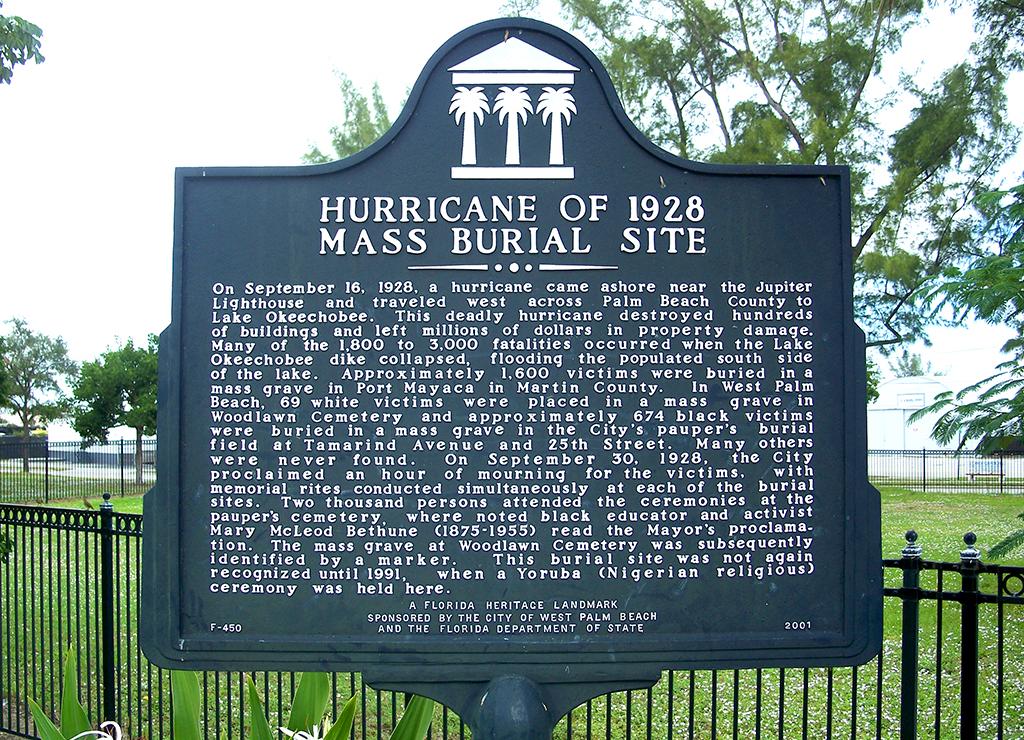 On September 16, 1928, the Okeechobee Hurricane or Hurricane San Felipe Segundo, one of the most devastating tropical cyclones in Florida’s weather history and one of the ten most intense hurricanes to hit the United States mainland, came ashore near Palm Beach, Florida. It began as a tropical depression somewhere between West Africa’s Cape Verde and Senegal but by the time it crossed the Atlantic Ocean it was the first recorded Category 5 hurricane in the country’s history with winds at 140 miles per hour. The Okeechobee Hurricane came without the warning systems available today for such storms and state and local officials were barely prepared for the catastrophe. The impact of the storm was made worse by the ineffective communication and political posturing of Republican President Calvin Coolidge and Democratic Governor Doyle Elam Carlton, Sr.

The City of Palm Beach had by that point developed a reputation as the residential area of the wealthy and famous. West of Palm Beach into Palm Beach County there were extensive agricultural enterprises that specialized in sugarcane production. This labor-intensive crop depended on poor communities comprised primarily Bahamian migrant farm workers and African American sharecroppers, for labor.

While the Okeechobee Hurricane impacted all in Palm Beach County, the vast majority of the deaths from the storm came in the Bahamian and African American communities. Many of these people perished from the thrush of water rising as high as 20 feet and destroying weakened levees and dikes. Between 1,800 and 4,000 men, women, and children died and it was estimated that 75% of them were Black making this one of the deadliest natural disasters to impact African Americans and Afro-Bahamians. Officially there were 69 white victims and 674 black victims. This deadly hurricane caused more than $100 million in damage but the county and other local governments did not have resources to help the survivors or deemed them less important than the wealthy coastal population which was mostly white.

Blacks who survived were often forced to recover the bodies of relatives and friends who died in contaminated waters. Most of the black survivors were not even allowed to bury their family members on the soil of the white landowners where they worked and lived as sharecroppers. This hurricane revealed institutional racism and in particular how unfairly allocated governmental resources were held back from local black families.

While white residents buried their relatives and friends with dignity in coffins in local cemeteries or rested them peacefully on their properties, deceased blacks were stacked on top of each other and the corpses burned ostensibly to prevent the spread of disease. Local authorities then authorities bulldozed the scorched bodies, burying them in makeshift mass graves on lands that were later zoned for industrial use.

In 2000, the city of West Palm Beach, recognizing what callous disregard of black life and lack of respect for the dignity of the black deceased, purchased the main mass burial site in 2000, and eight years later, placed a historical marker there in acknowledgment of what had happened and to restore some dignity to those who suffered and perished in 1928.