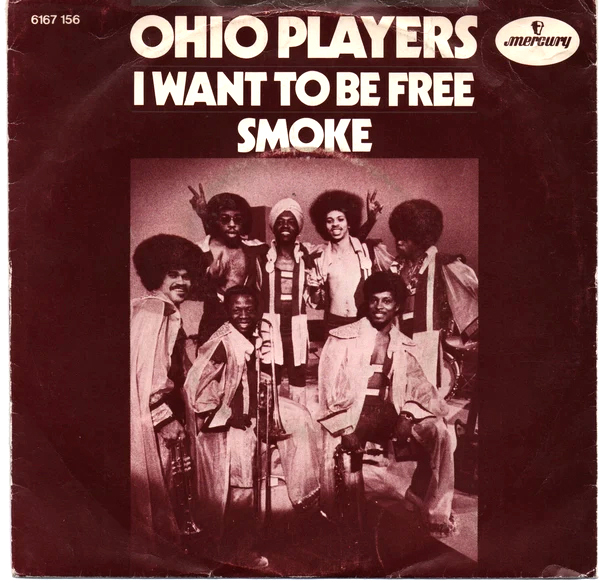 I Want to be Free / Smoke (Netherlands: Mercury, 1974) by Ohio Players
Fair use image

The Ohio Players who first called themselves the Ohio Untouchables, was a pioneering vocal and instrumental funk ensemble out of Dayton, Ohio. Established in 1959, the group comprised its organizer, pianist/principal vocalist Walter Morrison, trumpeters Bruce Napier and Marvin Pierce, vocalist/bass player Marshall Jones, saxophonist/guitarist Clarence Satchell, percussionist Cornelius Johnson, trumpeter/trombonists Ralph Middlebrooks and Greg Webster, guitarist Leroy Bonner, Percussionist James Williams, guitarist Robert Ward, and pianist William Beck. When the group formed, they were all seasoned singers and musicians. Over their career all of them collaborated with the lyrics, arrangements, and orchestrating of their music.

For their first dozen years the band was not particularly successful. In 1968, for example, the Ohio Players released their version of “Somewhere Over the Rainbow.” The composition was arranged and performed with prominent elements of doo-wop and jazz and released on their album, Observation in Time, on the Capitol Records label. Critics praised the song and album, but it did not make the charts.

The Ohio Players finally made their mark in the 1970s with a series of hits beginning with the song, “Skin Tight,” which peaked at #11 in 1974 on the U.S Billboard Hot 100 chart. In 1975, the group’s most successful record, “Fire” was released and peaked at #1 on the Billboard chart. That success allowed The Ohio Players to be nominated the Best R&B Vocal Performance by Duo, Group, or Chorus at the 18th Annual Grammy Awards in 1976 at the Hollywood Palladium.

Later in 1976, the Ohio Players released “Honey” on the Mercury Records label.  The song peaked at #3. Their next hit, “Love Rollercoaster” peaked at #1 on the Hot 100 chart and received the Recording Industry Association of America (RIAA) award certification platinum meaning it sold more than one million records.  None of subsequent releases were as successful. “Who’d She Coo?” (1976) peaked at #18, “Angel” (1977) peaked at #41, and “Everybody Up” (1978) finished out the decade by peaking #80.

In 1979, The Ohio Players encountered financial mistakes and professional conflict regarding disagreements for growth and development. They were unable to resolve their disputes and the ensemble disbanded in 1980.