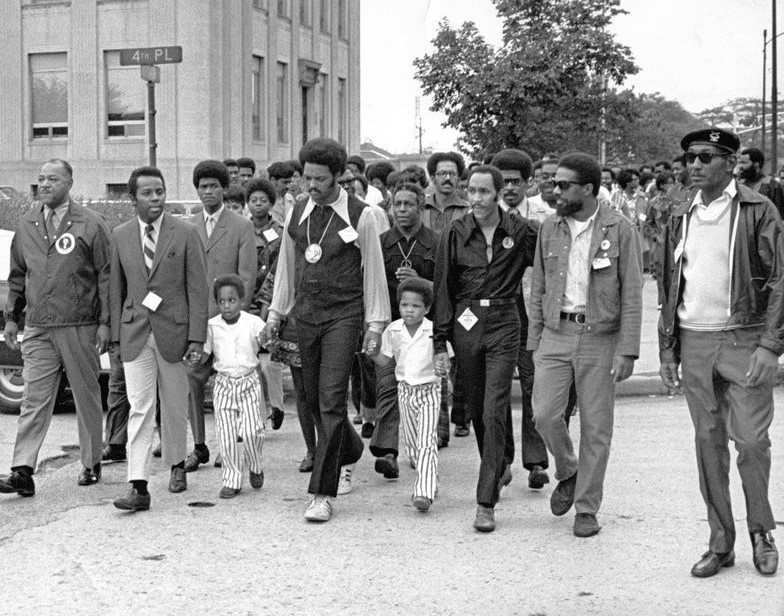 Mayor Richard Hatcher marching with Rev. Jesse Jackson and others in Gary, IN
© Calumet Archives/Post-Tribune, Fair use image

In 1972, Gary, Indiana hosted the National Black Political Convention. With over 10,000 attendees, it was the largest independent black political gathering in U.S. history. Planning for the convention began in 1970. Organizers had a difficult time finding a city that was willing to host an influx of politically engaged black Americans not affiliated with either major political party. Not since the National Negro Congress met in the 1930s had such a massive gathering been held in one place. Approximately 3,000 individual state delegates, composed of Socialists, Black Panthers, Republicans, Democrats, and Nationalists, gathered in hopes of creating a cohesive political strategy to advance black civil rights.

The event was held at Gary’s West Side High School from March 10 to March 12. Black Panther co-founder Bobby Seale, U.S. Presidential candidate Shirley Chisholm, Muslim leader Minister Louis Farrakhan, poet Amiri Baraka, and widows Coretta Scott King and Betty Shabazz were some of the leaders in attendance. Due to bomb threats and violent acts surrounding the convention, armed civil defense personnel were on hand, and Muhammad Ali served as Sergeant-At-Arms during the event. Musicians James Brown and Harry Belafonte were two of the artists who performed during the two-day convention, and comedian Dick Gregory spoke to attendees about issues of policing and drug access.

A “National Black Agenda” was proposed during the event, one that included a cohesive black vote and locating black candidates that would support that agenda. North Carolina representatives urged that black men should receive Social Security benefits earlier than whites since their life expectancy was eight years shorter. Indiana demanded that the United States dedicate more resources to the plight of black Americans rather than the Vietnam War while other attendees proposed a bill of prisoners’ rights that included more humane treatment. At times, tensions ran so high during the convention that sections of delegations walked out. Reverend Jesse Jackson pushed for the formation of a black party, the Liberation Party, which drew criticism from the NAACP delegates who said such a move pushed continued segregation.

After intense debate, the “National Black Agenda,” a 68-page document, was published on May 19, 1972, Malcom X’s birthday. The resolutions included a proposal for a guaranteed minimum income of $6,500 for a four-person household, black representation in Congress proportionate to the black population in the U.S., and an end to national trade with countries that supplied the drug markets.