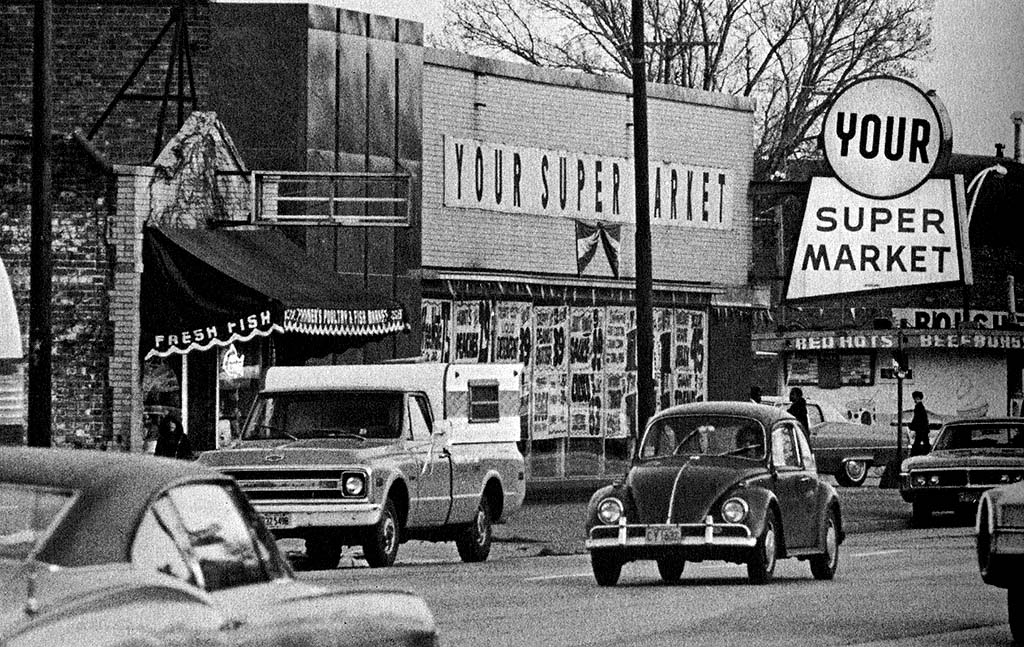 In the following article, historian Nafeesa Muhammad describes the often lauded but understudied economic program of the Nation of Islam (NOI). Here she focuses on the economic development plans put in place under the NOI’s longtime leader, Elijah Muhammad and their impact on African American economic advancement both in and beyond the organization.

The Honorable Elijah Muhammad led the Nation of Islam (NOI) from 1934 until his death in 1975. The NOI is an Islamic religious organization founded in Detroit, Michigan in 1930. Its followers are mostly black people who are often referred to as the Black Muslims. Under Elijah Muhammad’s leadership, the NOI brought a message of self-reliance, independence, and respect to blacks who were often confined to poor inner-city neighborhoods due to racial discrimination under systemic white supremacy.

From very early in the movement, Elijah Muhammad was the spiritual and organizational leader of the Nation of Islam. However, Muhammad actually credited the founding of the NOI to Wallace Fard Muhammad who in 1930 began teaching blacks an unorthodox form of Islam in the poverty-stricken areas of Detroit.  His ideas and beliefs appealed to the approximately 8,000 Detroit blacks, who quickly joined his movement between 1930 and 1934. Among these converts was Georgia-born Elijah Poole who later became the Honorable Elijah Muhammad, the leader of the NOI when Fard Muhammad mysteriously disappeared in 1934. Elijah Muhammad preached that Wallace Fard Muhammad was Allah (God) and that he was Fard’s messenger.

Elijah Muhammad led the expansion of the NOI beyond Detroit to other cities often recruiting from among the most impoverished urban blacks. He gave them a black nationalist philosophy centered in the fight against the systemic oppression of white America. Muhammad’s message enhanced the psychological self-image of blacks but it also focused on helping individual blacks and the black community develop economic success. While the NOI advocated economic self-reliance since its inception, Muhammad in 1964 introduced the Three-Year Economic Plan (also known as the National Savings Plan) specifically to help blacks achieve financial independence. Under this plan he urged black people to sacrifice for three years, purchasing no more than what they needed and in line with their incomes to save money. While he urged this program for NOI members he hoped that all black Americans would follow these ideas as well.

For members of the NOI, however, a large portion of the savings would be sent to the NOI headquarters in Chicago where the organization’s leaders would allocate it toward collective economic development including the purchase of arable land where vegetables could be grown and cattle could be raised. The plan also encouraged NOI members to purchase commercial real estate and timberland. The timber could be used to build homes for poor blacks. Lands with clay could be used to manufacture bricks which could be used to build brick homes that would then be sold at affordable prices to indigent people in black communities.

The Three-Year Economic Plan required NOI members who could afford to do so, to pledge one-tenth to one-third of their income to economic development. Members were also required to patronize NOI-owned businesses or to open their own economic enterprises which would be advertised in Muhammad Speaks, the NOI’s official newspaper.

With a peak membership of 70,000 by the early 1960s, the NOI’s Three-Year Economic Plan used the collective savings of the members to expand and concentrate black capital to develop both organization-owned and individual member-owned businesses. These businesses in turn promoted the NOI’s goal of an independent, self-contained, and black-controlled economy. In Chicago alone, the NOI organized fifteen different businesses including Your Supermarket, Shabazz Grocery, Chicago Lamb Packers, Shabazz Bakery, Good Foods, Shabazz Restaurant and Salaam Restaurant, Shabazz Barber Shop, and a clothing factory. Across the U.S., NOI businesses by 1970 included grocery stores, dress shops, dry cleaners, bakeries, and restaurants which provided food, cooked meals, and clothing to both Muslims and non-Muslims at affordable prices.

In the mid-1960s, the NOI purchased and developed farms in Michigan, Alabama, and Georgia that provided fresh meat and vegetables for its growing number of urban supermarkets. Despite opposition from local whites in the South—including Ku Klux Klan members who poisoned or shot cattle and attempted to sabotage crops—these NOI farms provided meat and produce delivered by a fleet of NOI trucks, and at one point an airplane, to NOI stores. As such the NOI had created the first black-owned national food production and distribution network, a longstanding dream of black nationalist organizations.

NOI businesses also offered a wide variety of employment opportunities for inner city residents, including serving as managers, clerks, secretaries, bakers, cooks, butchers, waiters, accountants, mathematicians, technicians, plumbers, and carpenters. Muslims and non-Muslims were employed in NOI-owned businesses. In 1958, for example, the NOI operated a dry-cleaning plant located at 608 East 63rd Street in Chicago. The plant was managed by Herbert Muhammad, one of Elijah Muhammad’s sons and directly employed five NOI members full time. Although the plant had two NOI delivery trucks, non-NOI members also were employed, often using their own vehicles to assist in the pickup and delivery of dry cleaning in exchange for a 35% commission on merchandise collected from and distributed to customers.

While Muhammad Speaks was officially the newspaper of the NOI from 1960 to 1975, it was also one of the organization’s most profitable enterprises. The newspaper grew rapidly because of the national network of male NOI members who distributed it. By 1969 the NOI produced the paper with an all-black printing crew in one of its buildings on a printing press capable of turning out 50,000 copies per hour. By the end of 1969 400,000 copies of Muhammad Speaks were printed per week. Those numbers grew to a record 950,000 in one week in 1974, making the paper one of the largest black-owned publications in the nation.

Although the NOI urged women to prioritize working in the domestic sphere as wives and mothers, many women contributed to the Economic Development Plan serving in leadership roles as captains, lieutenants, and secretaries. They also worked as teachers, directors, and principals within the NOI’s parochial schools, the University of Islam. Moreover, women wrote for and edited the Muhammad Speaks newspaper and some became managers and shopkeepers of the movement’s businesses. Sister Ethel Sharieff, a daughter of Muhammad was also involved in these economic activities. Sharieff managed the NOI clothing shop for women in Chicago which employed three full-time Muslim women and at times hired non-Muslims. Many non-Muslims also patronized the clothing store.

Some Muslim employees indicated that they made more economic progress and were more economically secure than other blacks from similar socioeconomic backgrounds. They attributed their economic security to their adherence to Muhammad’s Three-Year Economic Plan, which helped them save money by eliminating the desire to purchase liquor, tobacco, expensive clothes, and cars. They also saved money by restricting their diet to one meal per day, when possible, in accordance with NOI guidelines, which in turn reduced food expenditure.

The NOI’s economic development program peaked in the late 1960s and early 1970s. With an estimated 250,000 active members worldwide in 1975, the Nation had a formidable base of customers and employees to ensure the prosperity of many of their enterprises. With this additional capital, the NOI began acquiring large existing businesses. In 1968, the NOI purchased a four-story, sixty-thousand-square-foot building in Chicago’s South Side for $1 million. The building was used to accommodate the Muhammad Speaks newspaper operations. That same year, the NOI purchased a combined restaurant and supermarket (Salaam Restaurant and Your Supermarket) in Chicago for another $1 million along with a lamb slaughterhouse for $100,000 which provided meat for the restaurant-supermarket.

In January 1973, the NOI gained a controlling interest in the Guaranty Bank and Trust Company. This South Side Chicago bank expanded under NOI management to hold over $10 million in assets and employ more than 500 people by 1975. This “bank for the black man,” as Elijah Muhammad called it, reflected now decades-old capital accumulation practices by the NOI and indicated that the Nation was one of the wealthiest black organizations in the United States.

By 1974 NOI enterprises had taken on an international dimension with its agreement with a Peruvian fishing distributor to provide one million pounds of whiting fish from that South American nation. NOI members sold the fish door-to-door in black neighborhoods to Muslims and non-Muslims alike, promoting it as three times cheaper than land-produced meat, easier to digest, and unlike catfish, whiting was not a “bottom feeder.” In 1974 Minister Abdul Rahman Muhammad of Atlanta estimated that 200,000 pounds of fish were sold in the month of September alone.

By 1975 the Nation of Islam operated hundreds businesses throughout the United States which collectively employed over 11,000 people. The estimated annual revenue from these businesses was approximately $30 million per year. At the time of the death of the Honorable Elijah Muhammad on February 25, 1975, the net worth of the NOI totaled $80 million. That wealth was used to enhance the economic security of its members and to support the expansion of the NOI’s religious mission and the establishment of over 75 temples across the United States in 1975.

The NOI’s economic program declined after Elijah Muhammad’s death. Wallace D. Muhammad, Muhammad’s son, began to dissolve the NOI’s business enterprises due to mismanagement. Wallace also de-emphasized the NOI’s black nationalist agenda and moved the organization towards Sunni Islam. In 1977, Minister Louis Farrakhan, who served as the NOI’s national spokesman from 1967 to 1975 re-instituted the NOI Elijah Muhammad established, and has since re-purchased many of the farms and businesses that were lost during the post-1975 shift. The NOI or its individual members continue to own and operate several businesses in Chicago, New York, Atlanta, and Los Angeles.

Originally starting from a base of 8,000 impoverished Detroit residents in 1934, the Honorable Elijah Muhammad had transformed the Nation of Islam into an economic powerhouse with an enormous impact on the national black community which included both Muslims and non-Muslims.