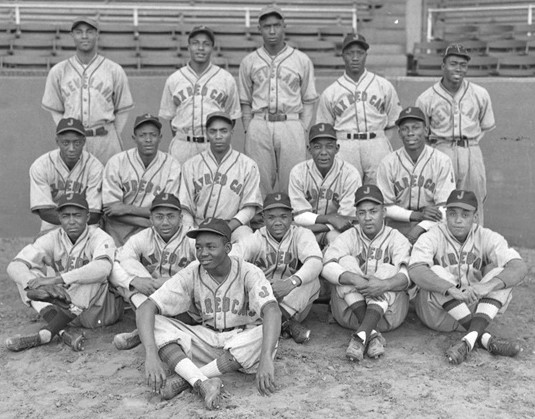 The Jacksonville Red Caps were a Negro League baseball team based in Jacksonville, Florida. The team played out of Durkee Field, the city’s first municipal recreation field. Dr. Jay Durkee, owner of the land, donated the property to the Jacksonville Baseball Association.

The Red Caps were originally formed by a group of local Black train porters, employees of the East Coast Railroad, that played together when they were off duty. The porters wore red hats as part of their uniform, and they were called the Red Caps during their workday. The team was officially put together by the Jacksonville Terminal Station, and managed by player Alonzo “Fluke” Mitchell. The Red Caps only played seven league games in their debut season in the Negro American League in 1938, finishing with a 3-4 record. They played more than 180 games between 1939 and 1944 and recorded a winning percentage of .419.

Due to poor attendance and a bad first season, the team moved to Cleveland, Ohio in 1939, and became the Cleveland Bears. They played their home games out of Hardware Field, and finished the season with a 20-12 record, placing third in the Negro American League. The following year, the Cleveland Bears dropped to a 6-16 record, finishing last in the league.

In 1941 the team returned to Jacksonville and their original Jacksonville Red Caps name. They finished the season at 8-10, coming in second to last in the league. The 1942 season was no better for the club, with a 2-6 record, and the team was dropped from the league in July. The Red Caps continued to play as an unaffiliated team at Durkee Field until the end of World War II.

On June 28, 2008, the Jacksonville Red Caps throwback uniforms were worn in a game played between the Tampa Bay Rays and the Pittsburgh Pirates. The team also has a beer in their honor named Red Caps Red Ale at Strings Sports Brewery in Jacksonville.