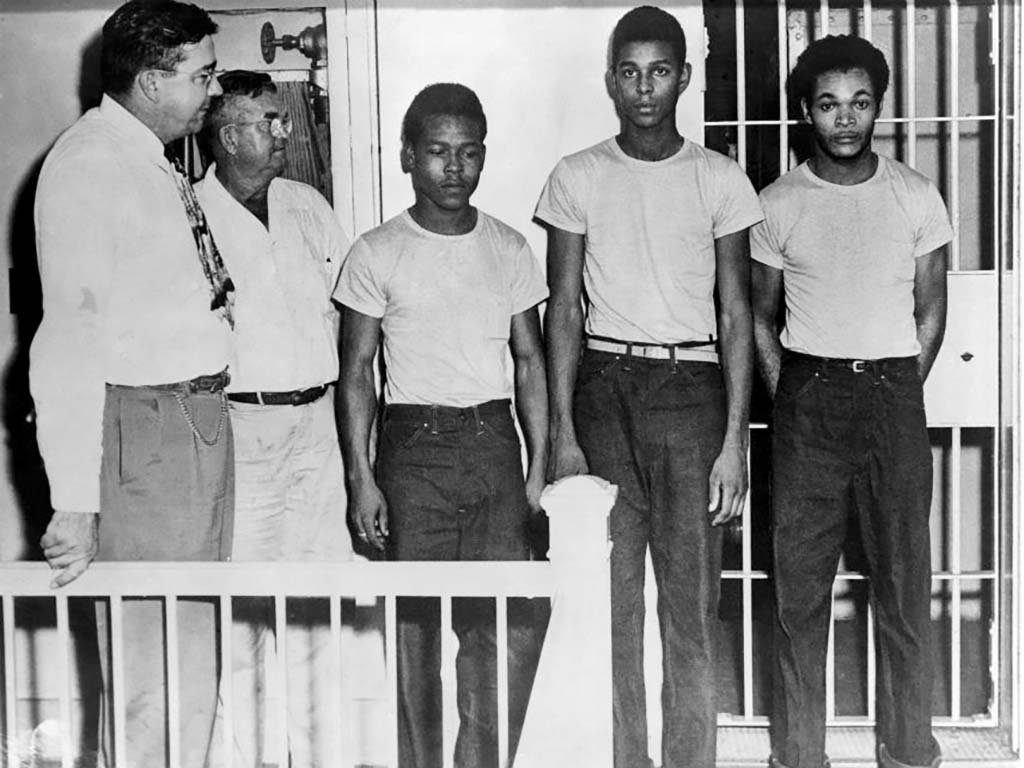 The Groveland Four case was a 1940s example of injustice toward young African American men falsely accused of raping white women. The Groveland Four were four young black men, Ernest Thomas, Charles Greenlee, Samuel Shepherd and Walter Irvin, who were accused of raping Norma Padgett, a 17-year-old white woman on July 16, 1949, in Lake County, Florida. Thomas was killed by Sheriff Willis McCall on July 26, 1949, during the search for the four while Irvin, Shepherd, and Greenlee were arrested.

Much of the early life of the Groveland Four is unknown. Ernest Thomas was married to Ruby Lee Jones. Charles Greenlee first arrived in Lake County, Florida in July 1949. Thomas had convinced Greenlee that he could find work in the county. Samuel Shepherd was a World War II veteran and the son of a prosperous local black farmer. Walter Irvin was also a World War II veteran.

On July 16, 1949, Thomas, Greenlee, Shepherd, and Irvin were accused of kidnapping and raping Norma Padgett and assaulting her husband Willie Padgett. According to her husband, their car broke down after the couple left a dance. Padgett claimed that the four black men stopped to offer them assistance but instead assaulted him and kidnapped his wife. After a manhunt, Greenlee, Shepherd, and Irvin were arrested and taken to Lake County jail, where they were tortured. Thomas avoided capture for a week, but he was killed by Lake County Sheriff Willis McCall.

The following day, as news spread around Lake County about the rape, a mob of more than 100 men gathered at the jail demanding that Greenlee, Shepherd, and Irvin be released to them. Sheriff McCall told the mob that the three had already been transferred to a state penitentiary, when in fact they were still in the Lake County Jail. The mob then vented its anger on the small Groveland African American community, shooting residents and setting fire to homes. Some whites, however, helped blacks escape the violence around the area. Meanwhile Greenlee, Shepherd, and Irvin were tried. Although medical evidence did not show signs of Padgett being raped, an all-white jury found the three men guilty. Shepherd and Irvin received the death penalty, while Greenlee received life in prison.

The U.S. Supreme Court later tossed out the three convictions, forcing a retrial in November 1951. As the three were being transported back to Lake County, Florida from the state penitentiary, Sheriff McCall shot and killed Shepherd and seriously wounded Irvin. Irvin’s retrial on November 13, 1952 resulted in another guilty verdict and death sentence from an all-white jury. In 1955, his sentence was reduced to life in prison by Florida Governor LeRoy Collins.

Walter Irvin was released from the state penitentiary in 1968 but died a year later from a heart attack. He was 39 years old. Charles Greenlee, the last surviving member of the Groveland Four, was released on parole in 1962 and moved to Nashville, Tennessee. He died on April 18, 2012. at 78 years old. In 2017, the state issued an apology to the families of the Greenland Four. All four men were posthumously pardoned on January 11, 2019 by Florida Governor Ron DeSantis.