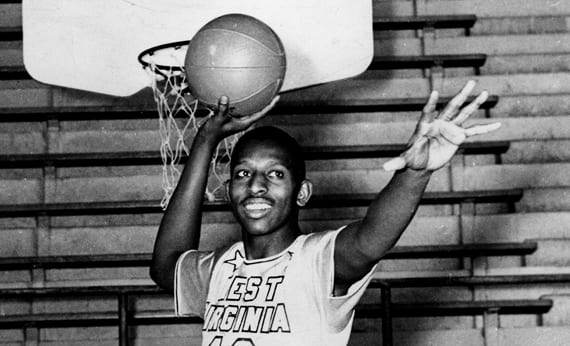 The first African American players in the National Basketball Association in the twentieth century all came into the league in 1950. They were Earl Francis Lloyd (Washington Capitols), Charles Henry Cooper (Boston Celtics), and Nathaniel Clifton (New York Knicks). They all began their college careers at Historically Black Colleges and Universities (HBCUs).

Lloyd, 6′ 6″, was born on April 3, 1928, in Alexandria, Virginia and graduated from Parker-Gray High School in 1946. He enrolled in West Virginia State University in 1946, where he was an All–American player and received his Bachelor of Science in health and physical education in 1950.  The 21-year-old was drafted in the ninth round, and on October 31, 1950, he became the first Black athlete to play in the NBA with the Washington Capitols. Lloyd also played for nine seasons with the Syracuse Nationals (who later became the Philadelphia 76ers). In 1970, Lloyd became the first full-time African American head coach in the NBA when he coached the Detroit Pistons for a year.

Cooper, 6′5″, was born on September 29, 1926, in Pittsburgh, Pennsylvania. After graduating from Westinghouse High School in Pittsburgh, he enrolled at West Virginia State University in 1944. However, he transferred to Duquesne University in 1946. In 1950, he signed with the Harlem Globetrotters. On April 25, 1950, he became the second African American drafted into the NBA when the Boston Celtics chose him as the 14th overall pick. Cooper made his NBA debut on November 1, 1950, one day after Lloyd, against the Fort Wayne Pistons. He played four years with the Celtics and then was traded to the Milwaukee Hawks. He ended his career with the Ft. Wayne Pistons. After retiring from professional basketball, he earned a Master of Social Work from the University of Minnesota in 1960.

Nathaniel Clifton, 6′8″, was born Clifton Nathaniel on October 13, 1922, in England, Arkansas, and reared in Chicago, Illinois, from age eight. He reversed his name during his senior year at DuSable High School in Chicago, graduating in 1940. From 1942 to 1943, he was a student at Xavier University in New Orleans, Louisiana and played only one season in college. In 1948, Clifton signed with the Harlem Globetrotters. Clifton became the third African American player to sign an NBA contract and made his New York Knicks debut on November 4, 1950, three days after Cooper. At age 34, Clifton was the oldest player in NBA history to be named a first-time All-Star. In 1958, Clifton was traded to the Detroit Pistons but left the team a year later. Afterwards, he played for a start-up professional team, the Harlem Magicians. He played several more seasons, first with the Globetrotters and then with another start-up, the Chicago Majors. After a knee injury in 1965, Clifton retired. And in 1978, he was inducted into the Black Athletes Hall of Fame.