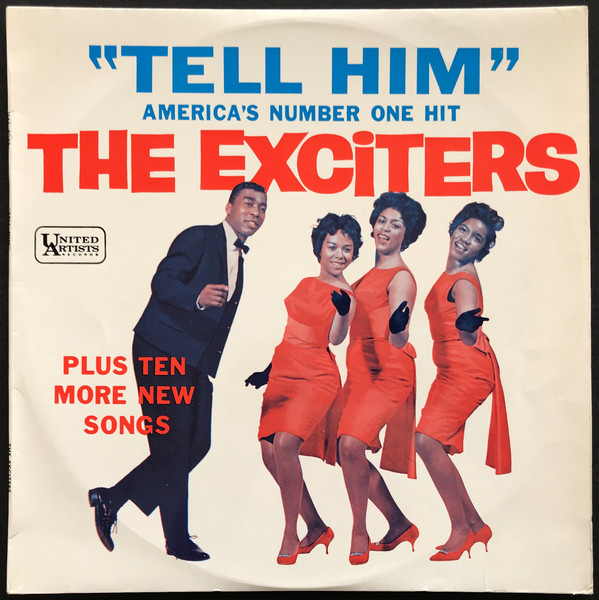 The Exciters were one of the first girl groups to have a no. 4 hit on the U.S. pop chart in 1962 and no. 5 on the R&B chart in 1964. Their first hit single “Tell Him” sold over a million records. The original members of the Exciters were Brenda Reid, Lillian Walker, Carolyn Johnson, and Sylvia Wilburn. In 1961, the 17-year-olds were classmates in high school in Jamaica, Queens, New York, when they formed the group.

Originally called the Masterettes, they performed as a sister act with the Masters, a local doo-wop quintet founded by record producer and songwriter Herb Rooney. In 1962, the Masterettes were introduced to Jerry Leiber and Mike Stoller, record producers at United Artists, who offered them a contract. That same year, they changed their name from the Masterettes to the Exciters and recorded “Tell Him.” Sylvia Wilbur soon left the group and was replaced by Penny Carter. When Carter left, she was replaced by Herb Rooney and in 1964 Reid and Rooney married.

Some of their subsequent recordings included “He’s Got the Power” which reached no. 57 on the R&B chart (1963), followed by “Get Him” in 1964. “Do Wah Diddy,” written by Ellie Greenwich and Jeff Barry, hit no. 78 on the pop chart. Covered by Manfred Mann, it became an international hit for the English entertainer. In 1965 the Exciters recorded “I Want You to be My Boy” followed by “A Little Bit of Soap” (1966). After their single “Having My Fun” failed to chart, in 1965, the Exciters left Leiber, Stoller and United Artists and signed with Roulette Records. They recorded for the record labels Bang, Shout, and later for RCA. By the early 1970s, Walker and Johnson left and were replaced by Skip McPhee and Ronnie Pace. In 1975 they recorded “Reaching for the Best,” which hit no. 31 on the United Kingdom chart.

After the Exciters broke up in 1974, Reid and Rooney began recording as a duo. In 1978, they recorded “Tonight I’m Going to Make you a Star,” which hit no. 70 on the R&B chart. When Brenda and Herb Rooney separated, Brenda formed a new Exciters with family members. Herb started a cosmetic company. During their marriage they had four children, three daughters and a son. Their son, Mark Cory Rooney, became a producer and executive with Sony Records. Herb Rooney died in the early 1990s. Carolyn Johnson died on May 7, 2007, at the age of 63.