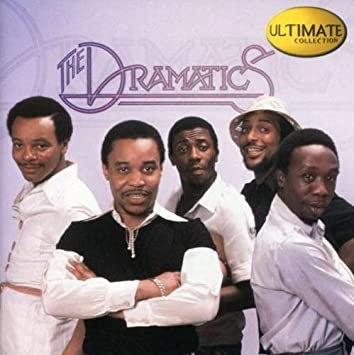 The Soul-funk R&B ensemble, known as the Dramatics and formed in 1964 in Detroit, Michigan, began as the Dynamics, a vocal sextet. The original members included countertenor Ron Banks born on May 10, 1951, tenor Cleveland Larry Reed, born on October 17, 1948; and baritone Robert Ellington, born on May 15, 1964. A year after founding, the other members joining were baritone Elbert Wilkins, born May 1, 1947; bass/baritone Larry Demps, born February 23, 1949, tenor Lenny Mayes, born April 5, 1952, and tenor William Franklin Howard, born on July 13, 1950. They were all born in Detroit. Bass Willie Ford Jr. was born July 10, 1950, in LaGrange, Georgia, and baritone Rod Davis was born on December 4, 1946, in Pensacola, Florida. Ford and Davis were reared in Detroit. Over the years the Dramatics had numerous personnel changes.

The ensemble became a quintet in 1967, signing with the Sports label and renaming themselves the Dramatics. Their first single hit was “All Because of You,” (1967). While the members at that time, Banks, Mayes Ford, Demps, baritone Larry J. Reynolds (born in Saginaw, Michigan, on January 27, 1952) and pianist James Mack Brown (born on August 5, 1952, in Dallas, Texas) were not satisfied with its limited record sales, the song did peak at # 42 on the R&B charts.

In the 1970s, the Dramatics experienced a string of hits that included “Whatcha See Is Whatcha Get”(1971) off the album In the Rain, which quickly moved into the Top 10 of the Billboard Hot 100, peaking at #9 rising to #3 R&B chart. The ensemble’s first major national hit sold a million records and remained on the charts for 15 weeks. The following year, 1972, the single “In the Rain” peaked at #1 on R&B and peaked at #5 on the pop chart. It also sold more than a million records. “Hey, You! Get Off My Mountain” reached # 5 on R&B and peaked at # 43 on pop chart in 1973. The ensemble moved over to Cadet Records in 1974, and the following year in 1975 to ABC. They charted the hit “Be My Girl” that peaked at #3 on R&B chart.

In 1982, the Dramatics disbanded but reunited in 1985. In 1989 they were on the Volt Records label where they released the album, Positive State of Mind. The album, Stone Cold followed in 1990 and then the album, If You Come Back to Me in 2000.

In 2006, the Dramatics were honored by the City of Detroit when a street was named after them in the Woodbridge Estates neighborhood. Two years later in 2008, the group received the Lifetime Achievement Award” at the Soul Tracks Readers’ Choice Awards. In 2013, they were inducted into the National Rhythm and Blues Hall of Fame and the R&B Music Hall of Fame at Cleveland State University.