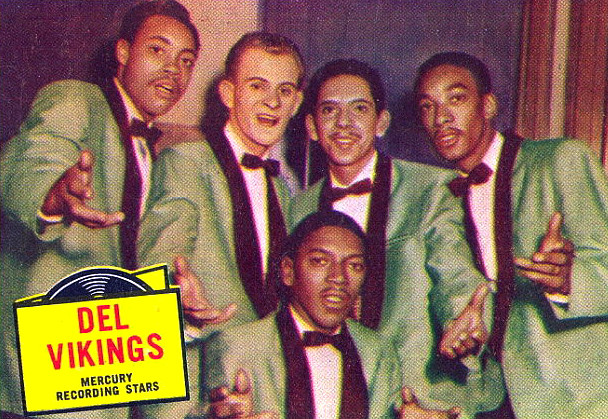 The Del-Vikings were the first successful racially integrated Doo-Wop rock and roll ensemble formed in the United States and specifically in the United States Air Force during the Jim Crow era. The group, organized in 1955 at the Pittsburgh (Pennsylvania) Air Force Base, comprised six enlisted African Americans Airmen: composer/tenor Corinthian “Kripp” Johnson, born May 16, 1933, in Cambridge, Massachusetts; baritone Donald Edgar Backus, born September 12, 1937 in Southampton, Long Island, New York; tenor Don Jackson, birthplace and birthdate unknown; baritone Bernard Robertson, birthplace and birthdate unknown; principal tenor Norman Wright, born October 31, 1937, and baritone Samuel Paterson who was also known as Clarence E. Quick, born on February 2, 1937. As amateurs they performed at the Non-Commissioned Officers’ Service Club on the Pittsburgh Air Force Base. By the end of their first year, the ensemble had won several music contests on the base in 1956. Baritone David Lerchey, born January 2, 1938, in New York City, was the first white member to integrate the ensemble when he joined in 1956.

In late 1956, the Del Vikings released their first single “Come Go with Me” on Dot Records. The next year, 1957, it peaked at #4 on the Billboard pop chart on the Billboard and reached #3 on the R&B chart. The record remained on the charts for 31 weeks. Their next single, “Cool Shake” peaked at #12 Pop and #9 R&B. With this type of exposure and success, the Del Vikings quickly became a sought-after ensemble which drew national attention and toured throughout the United States. They were featured on the Ed Sullivan Show, Dick Clark’s American Bandstand, and Allen Freed’s Brooklyn Paramount shows.

In 1957, tenor Gus Backus, another white soldier, was invited to the group as a replacement for Don Jackson as second tenor. Now with two white members, the Del Vikings stood out. However, the biggest obstacle that the group faced was in fulfilling its performing obligations while serving in the Air Force because it was first obligated to the military and did not have a flexible schedule like the civilian music groups.

Between 1957 and 1959 the ensemble included Chuck Jackson, the only member who would go on to a successful career as a solo R&B artist. During the late 1950s and early 1960s Clarence E. Quick composed most of the group’s lyrics, including their third single, “Whispering Bells” on the Fee Bee label in 1957. It peaked at #9 on the pop charts.

By 1965, the original Del Vikings disbanded. Seven years later, in 1972 Clarence Quick reconstituted the group in hopes of a career revival. They recorded a new version of “Come Go with Me” for the Scepter label that got some notice on the Billboard early in 1973. After that point they never recorded again.

Because of the unique music structure, engaging performance, and excellent sound production, the Del Vikings were inducted into the Vocal Group Hall of Fame 2005.