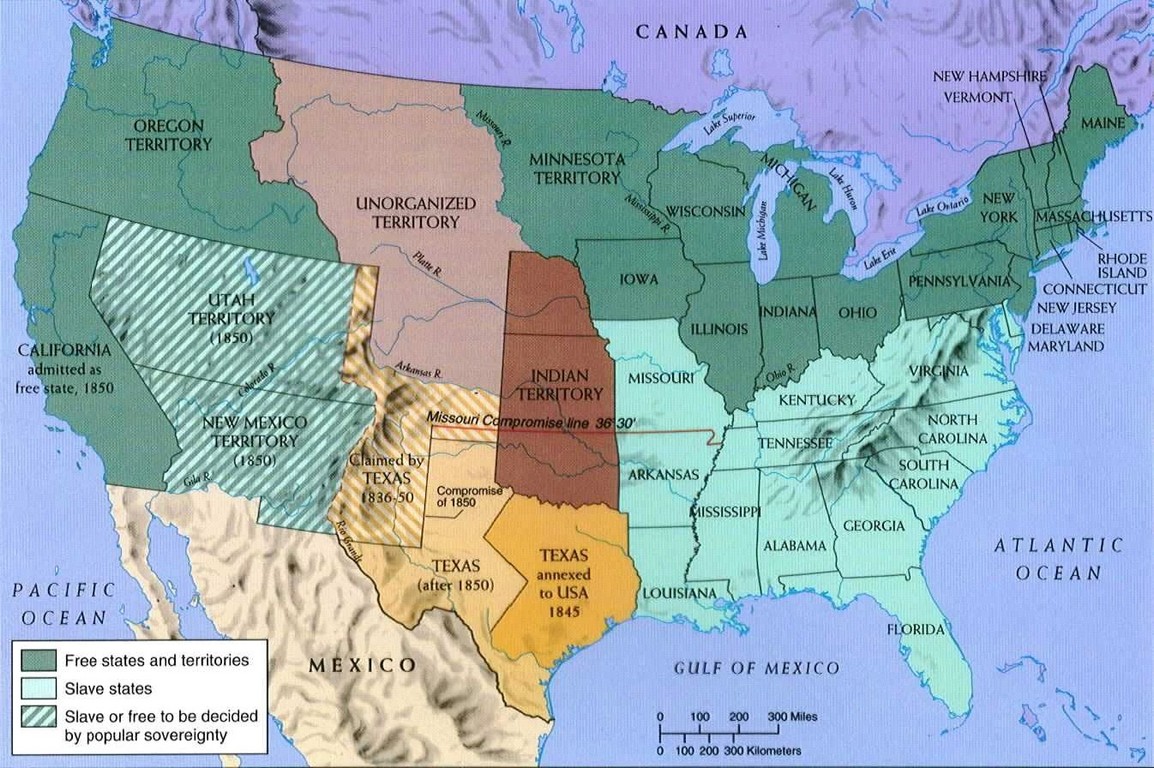 The Compromise of 1850, enacted in September of that year, was a failed attempt to diffuse a tense political situation between free and slave states that had emerged after the Mexican-American War (1846-1848). As a result of Mexico’s defeat, that nation ceded a vast territory to the United States (see map). Soon a debate emerged between free and slaveholding states as to whether slavery would be permitted in the newly acquired land.

Earlier compromises had established a pattern of an equal number of senators from free and slaveholding states. This was the case in 1850. How could this delicate balance be maintained when these new territories applied for statehood?

U.S. Sens. Henry Clay (Whig, Kentucky) and Stephen Douglas (Democrat, Illinois) worked together with U.S. President Millard Fillmore to address the issues dividing the nation. The result was an omnibus bill that was presented to Congress. This bill addressed the expansion of slavery into the territories of Utah and New Mexico, and the Texas claim on a portion of the new territory in the West. That bill was defeated.

This large bill was then broken into five smaller bills. This allowed congressmen to vote or abstain on each one separately. These five bills are collectively known as the Compromise of 1850.

The main provisions of the bills were:

1. California would be admitted to the Union as a free state.

2. Texas would surrender some territorial claims and in return the federal government would assume its state debt.

3. Voters in the new territories would decide if slavery would be legal. The national government would not dictate the status of slavery in each territory. This was the doctrine of popular sovereignty.

4. A more stringent Fugitive Slave Act was passed. Returning fugitive slaves residing in the North to their Southern owners would become a federal responsibility.

5. The slave trade would be abolished in Washington, D.C., but slavery would continue to be legal in the nation’s capital.

The immediate result of the Compromise of 1850 was to avert the threat of dissolution of the United States. The secession of the South and creation of the Confederacy was postponed for a decade. The concept of popular sovereignty was soon to result in a proxy civil war in the Kansas Territory. Also, in the North there was a strong reaction against the Fugitive Slave Act. Under this act fugitive slaves could not testify in court and could not have a jury trial. The act provoked increasing numbers of citizens to be determined to prevent slavery’s westward expansion.

Pro and anti-slavery attitudes polarized after the enactment of the Compromise, which forestalled the inevitable conflict between free and slave states for 10 years. It failed in its goal of providing a permanent political solution to the issue of slavery. During those 10 years the disintegration of the Union became increasingly likely as mutual bitterness, political polarization, and sectional hostility flourished throughout the United States.