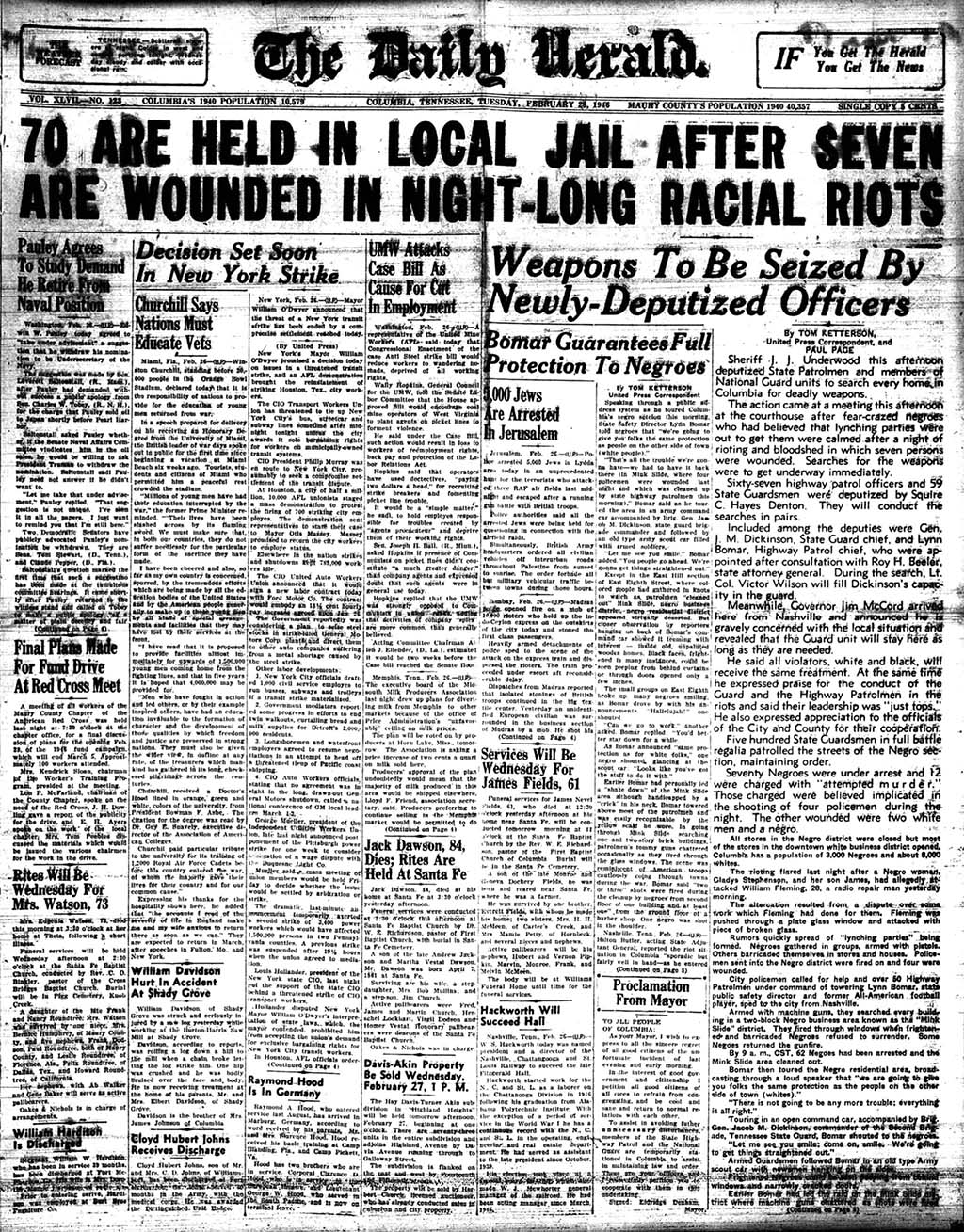 The race riot in Columbia, Tennessee, a town of 10,911, from February 25 to 28, 1946 was early example of post-World War II racial violence between African Americans and whites in the United States. On February 25, 1946, James Stephenson, a World War II veteran, and his mother, Gladys Stephenson, went to Castner-Knott, a local department store, to pick up the radio they had taken for repair, not knowing it had been sold to another customer. When Mrs. Stephenson demanded the radio, William Fleming Jr., a store employee, confronted her. Defending his mother who was being verbally abused, Stephenson began fighting Fleming and threw him through a window, injuring him. Stephenson and his mother were arrested and charged with disturbing the peace.

Both pleaded guilty and received a $50 fine. The Stephensons were arrested again after William Fleming Sr. filed charges against them on behalf of his son for assault with the intent to commit murder. Julius Blair, a local black businessman, posted the Stephensons’ bond and they were released.

During the same time, however, a white mob after hearing about the fight between Fleming and Stephenson, gathered at the Maury County Courthouse while black townspeople came together in Mink Side, a black business section. Concern about the fight and the possibility of mob violence against the entire black community, prompted many of them to arm themselves. They decided to turn out the lights in Mink Slide and began shooting out the streetlights.

Hearing the gunshots, the Columbia Police Chief sent four patrolmen to Mink Side. When the police arrived, blacks blocked their entry. More shots rang out and the four officers were wounded. Following the shooting, Tennessee State Safety Commissioner Lynn Bomar led other police officers and state highway patrolmen into Mink Side. When they arrived, they began indiscriminately firing into buildings, searching homes, confiscating weapons, and, according to some, stealing residents’ property. During the confrontation, more than one hundred black women and men were arrested

On February 28, 1946, the Maury County deputies began questioning the prisoners about the shooting of the policemen. Three black men were singled out as most likely responsible: James Johnson, William Gordon, and Napoleon Stewart. During the interrogation, Tennessee highway patrolmen arrived and took the three men, whom they accused of shooting at them, to the sheriff’s office. Two of the prisoners, Johnson and Gordon, took weapons from the officers and began shooting at the other patrolmen. The patrolmen returned fire, killing both Johnson and Gordon and injuring one other prisoner. Stewart was not injured during the shooting.

The executive secretary of the National Association for the Advancement of Colored People (NAACP), Walter White, and chief legal counsel Thurgood Marshall, came to Columbia to organize a defense for the remaining prisoners. They brought in attorneys Z. Alexander Looby of Nashville and Maxwell Weaver of Chattanooga, for the upcoming trial.

Twenty-five Columbia blacks were tried on charges of shooting at white policemen in nearby Lawrenceburg, Tennessee. On October 4, 1946, an all-white jury surprisingly found only two of the twenty-five blacks guilty, and the charges were later dropped. One reason for the verdict: many whites in Lawrenceburg felt embarrassed that trial had to occurred in Lawrenceburg instead of Columbia where the riot occurred. The Columbia Race Riot of 1946 foreshadowed the growing militancy of blacks that would be seen in the numerous urban uprisings of the 1960s.