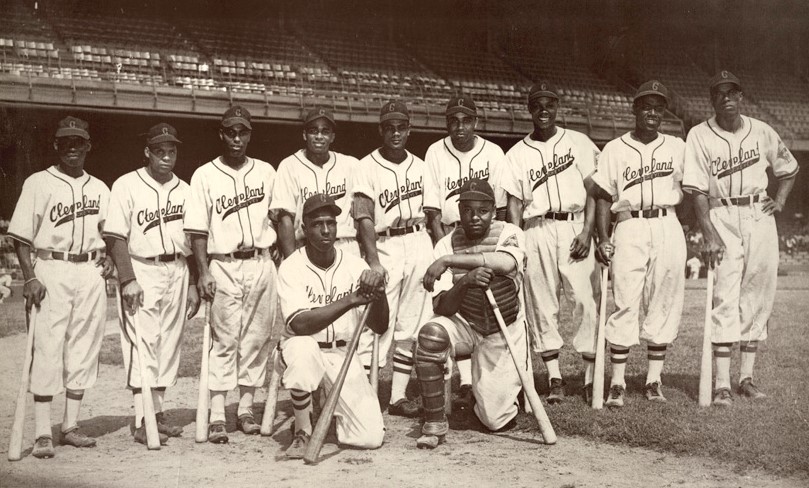 The Cleveland Buckeyes were a Negro League baseball team established initially as the Buckeyes Baseball Club, in Cincinnati, Ohio. On the eve of World War II, a white Cleveland sports promoter, Wilbur Hayes, approached Erie, Pennsylvania black businessman Ernest Wright about financially backing a Cleveland-based black baseball team. The two collaborated and brought together a strong team of professional baseball players who initially played their home games out of Crosley Field, in Cincinnati. Due to star team members being drafted into military service during World War II, several cuts needed to be made to meet expenses in the face of declining revenues, including team transportation. While carpooling between games, the team suffered a tragic car accident on September 7, 1942. Pitcher Raymond “Smokey” Owens and catcher Ulysses “Buster” Brown were killed, and team manager Hayes, pitchers Eugene Bremerton, Alonzo Boone, and Herman Watts were also injured. Despite this tragedy the team somehow managed to finish the season in second place in the Negro League.

The following year, 1943, the team was permanently based in Cleveland and officially became the Cleveland Buckeyes. They played their games out of League Park, located on the northeast corner of East 66th street and Lexington Avenue. During the 1943 and 1944 seasons the team was managed by run by manager/ third baseman Parnell Woods. Other team members included pitchers Sam Jethroe and William Grace, first baseman Archie Ware, and infielders Johnnie Cowan, Billie Horne, Duke Cleveland, Eugene Bremer, Willie Jefferson, and Alonzo Boone. The 1945 season brought in manager/ player Quincy Trouppe, and this star lineup won the 1945 Negro League World Series, and 1945 and 1947 Negro American League championships.

In 1949, the team moved to Louisville, Kentucky, and played as the Louisville Buckeyes. The Buckeyes played out of Parkway Field, but after a dismal season, they returned to Cleveland, and the Cleveland Buckeye name. The team disbanded at the end of the season. The Cleveland Buckeyes throwback jerseys have been worn in 2006, 2015 and 2017 major league baseball games by the Cleveland Indians team.