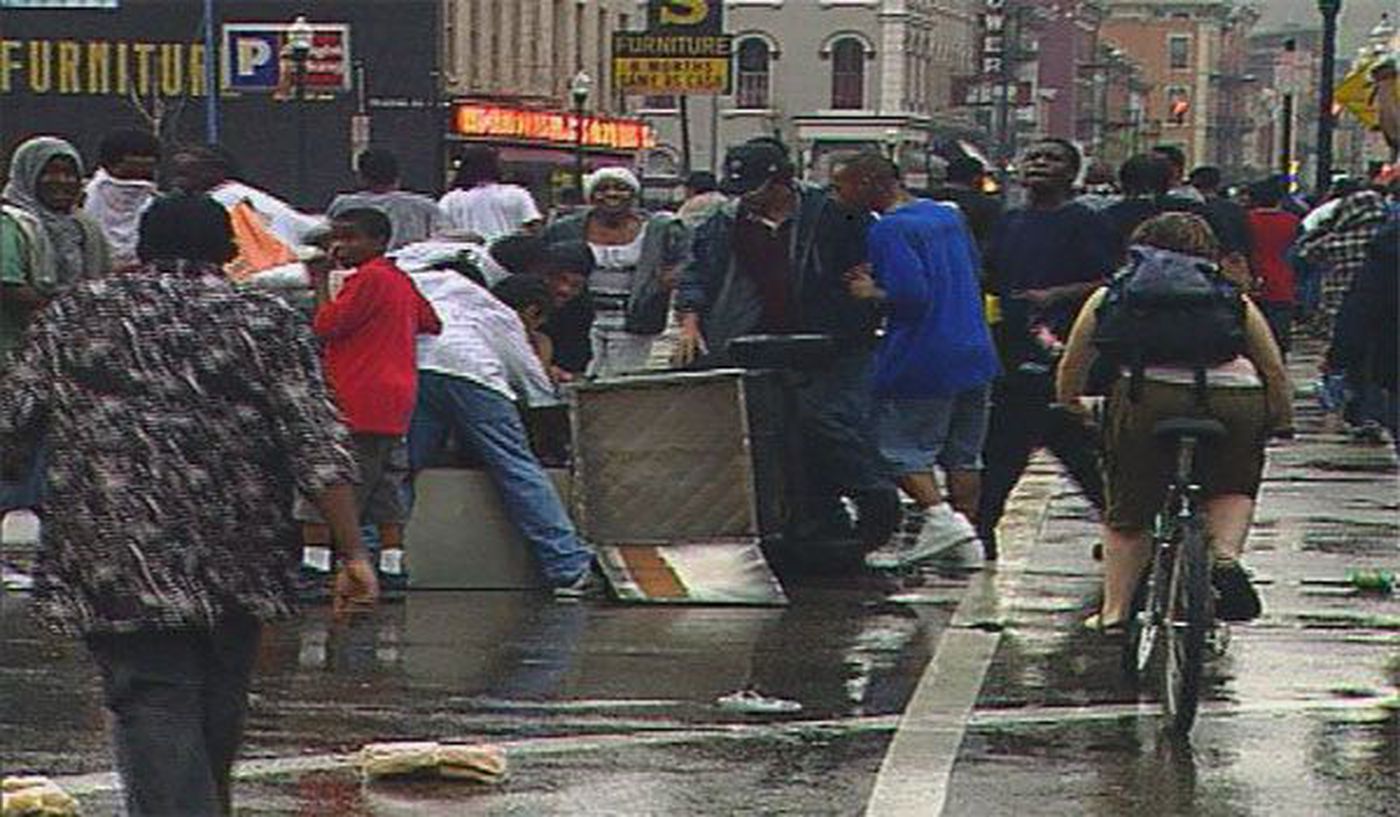 The Cincinnati Riot was a four-day period of civil disorder that occurred in response to the shooting death of nineteen-year-old Timothy Thomas by Cincinnati Police Patrolman Stephen Roach.  Officer Roach was attempting to arrest Thomas for traffic citations. The riot mostly took place in the Over the Rhine neighborhood near downtown Cincinnati, Ohio between April 9 and April 13, 2001. The riot was the largest urban disturbance in the United States since the 1992 Rodney King Riots and caused an estimated $3.6 million in damage to 120 businesses and public buildings.

On April 9, 2001, a group of 200 protesters including Timothy Thomas’s mother, Angela Leisure, gathered outside Cincinnati’s City Hall while a city council meeting was in session to demand an explanation for the shooting of Thomas on April 7.  The protesters wanted the results of an investigation of the shooting but were told that the investigation was still ongoing.  Protesters then trapped city council members inside city hall for three hours when the council did not respond to their demands.

Meanwhile, by early evening several hundred residents gathered outside the Cincinnati Police District headquarters in the Over the Rhine neighborhood where they confronted police officers on horseback and in police cruisers. The crowd threw stones and bottles at the police, smashed the police station’s front door, and pulled the station flag from its mast which they re-hung upside down. Police in riot gear responded with tear gas, bean bags, and rubber bullets fired into the crowd. Ten arrests were made that day.

The next day, the riot resumed after a protest march of 20 to 50 young African American men began moving along streets in the Over the Rhine neighborhood, followed closely by police officers. As the march continued, the crowd of protesters grew larger and began to throw bottles and garbage at the police. Some of the crowd head downtown, overturning garbage cans, vending machines, and newspaper boxes. They also smashed business windows and began looting stores. Some white motorists were pulled from their vehicles and beaten. Cincinnati Police finally dispersed the crowd, arresting 66 people.  Meanwhile vandalism and looting broke out in other neighborhoods in Cincinnati including Walnut Hills and Avondale where rioters broke windows and set fires.

On April 11, 2001, a third round of rioting broke out downtown with more businesses damaged through looting and vandalism. The police arrested 82 people. The rioting stretched into the fourth day on April 12.  On the morning of April 13, 2001, Cincinnati Mayor Charles J. Luken announced a citywide curfew from 8 p.m to 6 a.m. He also declared a state of emergency and requested that Ohio Governor Bob Taft bring in 125 Ohio Highway Patrol troopers to help reestablish order.  More than 800 people were arrested for violating curfew.  On April 14, 2001, the day of the Timothy Thomas funeral, more than 2,000 protesters marched peacefully through the streets.  Although a number of people were injured, there were no deaths during the four days of rioting.