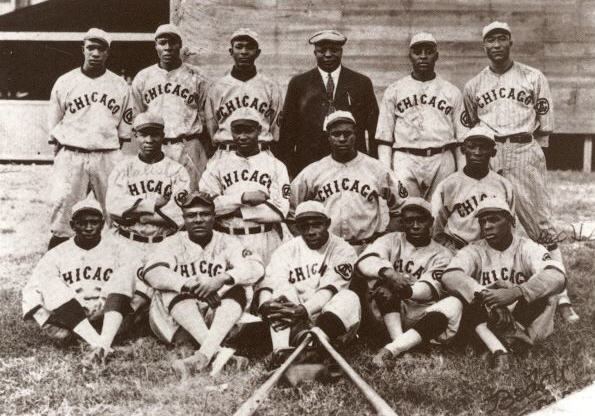 The Chicago American Giants were a Chicago-based Negro league baseball team, owned and managed from 1910 to 1926 by player-manager Andrew “Rube” Foster, known as the father of the Negro League Baseball. From 1910 until the mid-1930s, the American Giants were the most dominant team in Black baseball. Some of the most notable players in the team’s history were on the 1917 squad, before the establishment the Negro National League. That group included Bruce Petway, John Henry “Pop” Lloyd, Pete Hill, Frank Wickware, and “Cannonball” Dick Redding.

The team began in 1910 when Rube Foster, team captain, and Frank Leland, owner of the Chicago Leland Giants, split into two teams for the 1910 season creating the Chicago Giants and the new Leland Giants. Foster renamed the club in 1911 to the American Giants. During Foster’s time as manager, he led the team to their first three pennants. During the 1911 season, Foster went into partnership with White Sox owner Charles Comiskey’s son-in-law John Schorling. With that partnership the Chicago American Giants were allowed to play their games at the old Sox Stadium located on the South Side. For the first decade of the team’s dominance continued, they won every western championship, losing only to the 1916 Indianapolis ABCs. In 1919, the city of Chicago was at the center of violent race riots, which inspired the formation of the first Black baseball league. The Negro National League (NNL) founded in 1920, and the American Giants became one of the founding members.

Because of Foster’s psychological breakdown, his white business partner John M. Schorling ran the ballclub in 1926 and 1927. During the 1926 season, Dave Malarcher, Foster successor continued the winning tradition with the World Series titles. In the spring of 1928 Schorling sold the ballclub to William E. Trimble. After Foster’s death in December 1930, and the downfall of first the Negro National League in 1931, the franchise again rose to prominence as Cole’s American Giants, under the management of owners Robert A. Cole and Horace G. Hall. The Negro Leagues reopened in mid-1930s and the American Giants won five pennants, along with another pennant in the 1932 Negro Southern League and a second-half championship in Gus Greenlee’s Negro National League in 1934.

In 1936, the American Giants dropped out of the Negro National League to play as an independent team. In 1937, Dr. J.B. Martin took ownership of the American Giants and the team became a charter member of the Negro American League. Even though the franchise was confronted with many obstacles during the 1940s, the team remained in the league even after it had come to an end of major-league stature. The team finally ended in 1956. Foster built the Chicago American Giants into a dynasty before his departure, the organization was the longest continuous franchise in the history of Black baseball.