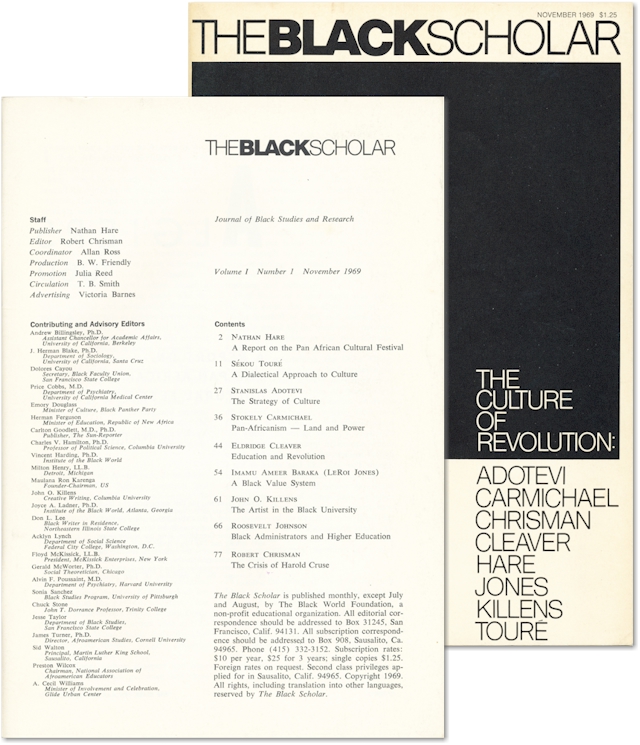 The Black Scholar is a quarterly journal founded in 1969 by Nathan Hare, Robert Chrisman, and Allan Ross. It is the third oldest journal of Black history and culture in the United States after The Crisis, the publication of the NAACP founded in 1910, and the Journal of Negro History, the publication of the Association for the Study of African American Life and History (ASALH), in 1916. In the mid-1960s, Hare and Chrisman were hired to teach Black studies at San Francisco State University. Hare was to head the first Black Studies program in the United States at a major university. Both professors were heavily involved in the student protests for equality led by the university’s Black Student Union (BSU) and Third World Liberation Front (TWLF).

In the aftermath of the assassination of Dr. Martin Luther King Jr. in April 1968, protests erupted into a student and faculty strike at San Francisco State University that lasted for five months. The strike was the first and the longest initiated by Black students in the U.S. and ended in March 1969. Both Chrisman and Hare were fired for their roles in the protests. The ordeal motivated the duo to create a journal to cover issues of social, cultural, political, and economic thought. In November, The Black Scholar: A Journal of Black Studies and Research (TBS) was founded with Chrisman as editor and Hare as publisher. Allan Ross, a white Bay area printer, was brought in as business manager.

The first issue of the journal was entitled “The Culture of Revolution.” It featured articles from Stokely Carmichael, Amiri Baraka, Eldridge Cleaver, and Sekou Toure, then the president of the West African nation of Guinea. Hare wrote an article on the first Pan-African Cultural Festival that was held in Algiers, Algeria, that past summer. Some of the early members of the editorial and advisory board included Angela Davis, Sonia Sanchez, Ossie Davis, and Maulana (Ron) Karenga. The Black Scholar was the first Black journal to publicly address sexism in “The Black Sexism Debate” (May/June 1979, Vol 10, nos. 8 and 9).  The journal was also the first to have a collection of writings focused on Black queer and transgender issues and aesthetics.

The Black Scholar Press began publishing books in the 1970s. Archives of The Black Scholar reside at the African American Writers Collection at the Bancroft Library at the University of California, Berkeley, and remains one of the largest and most heavily used collection of manuscripts, unique materials, and rare books in the United States. The Princeton Review of Academic Journals ranked the journal as no. 1 for Black studies in the United States. Hare left TBS in 1975 over an ideological dispute. Chrisman remained with the journal until his retirement in 2012, after serving as editor in chief and publisher for over 40 years. The journal is currently housed at the African American Studies program at Boston University.