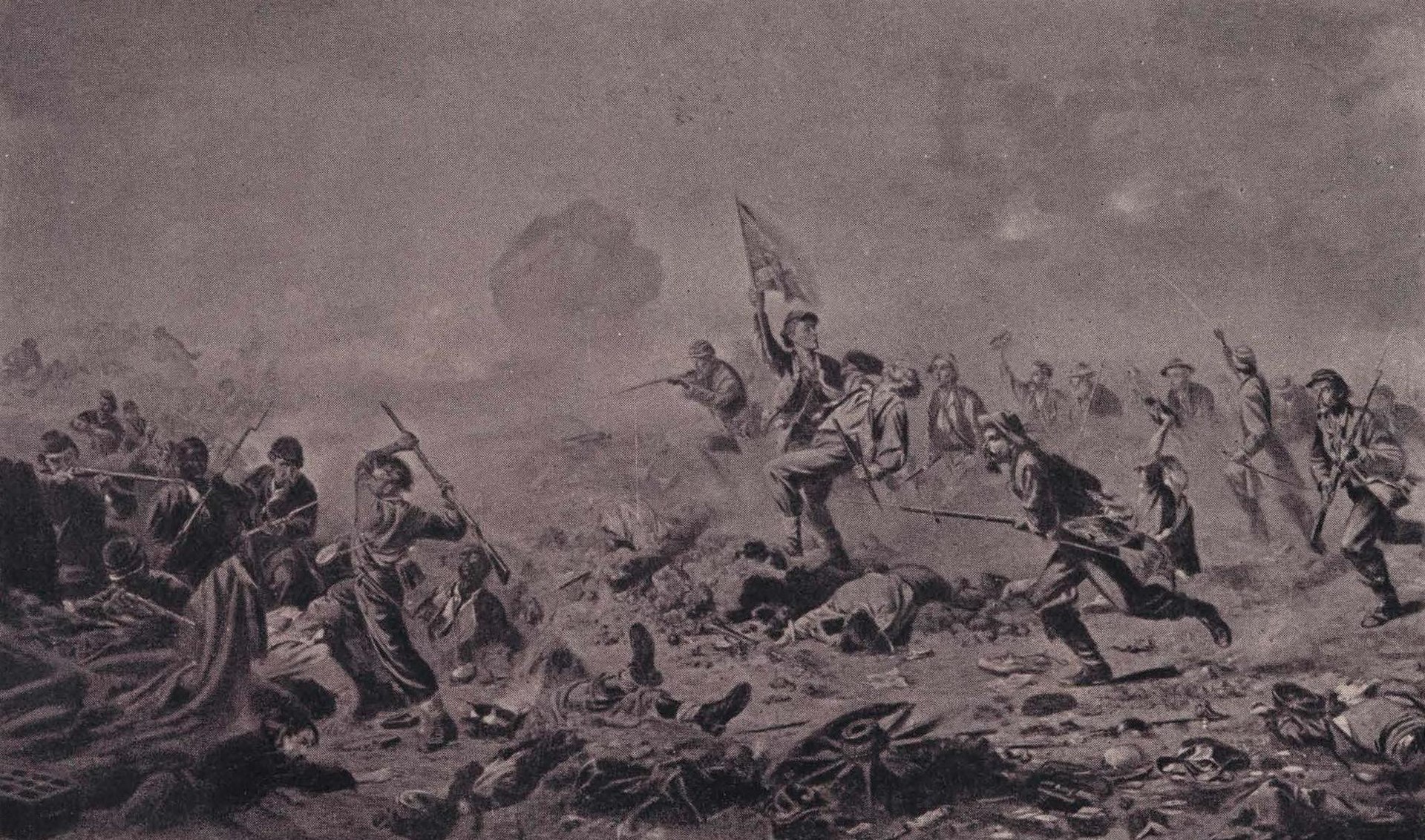 Battle of the Crater from the Virginia Tech Bugle, 1899
Public domain image

The Richmond-Petersburg campaign was a series of battles around Petersburg, Virginia during the third year of the Civil War. The campaign consisted of nine months of trench warfare in which Union forces led by General Ulysses S. Grant, General George C. Meade, and Major General Ambrose E. Burnside, fought against Confederate forces led by General Robert E. Lee in what became known as the Siege of Petersburg.

Petersburg was a critical location for both sides, as four major rail lines converged in the town. Operations began in May 1864, and by June, the two sides had reached a stalemate leading to the Union siege of the town. Lieutenant Colonel Henry Pleasants, a mining engineer in the 48th Pennsylvania Infantry Regiment, suggested digging a tunnel under the Confederate defensive lines, filling the shaft with explosives, and blowing a gap in Confederate forces, to break the siege. On June 25, Pleasants’ men began digging a 511-foot shaft that extended approximately 20 to 25 feet under Confederate lines by July 17. They then created a 75-foot lateral tunnel that was completed on July 23, and filled it with 8,000 pounds of black powder four days later.

Meanwhile, Brigadier General Edward Ferrero’s division of United States Colored Troops (USCT) was selected to lead the assault after the explosion. Union officers drilled the USCT, including many who had recently been enslaved, in preparation for the attack. However, on July 29, the day before the attack, General Meade vetoed Ferrero’s use of the USCT to lead the attack. He feared a potential political fallout if the attack failed and critics accused him of sacrificing black soldiers rather than white Union troops. Instead Brigadier General James Ledlie’s ill-prepared white division was selected to lead the attack.

At 4:44 on July 30 the explosion rang out and 278 Confederate soldiers were killed in the blast. A crater was formed about 170 feet long, 60 feet wide, and 30 feet deep. Ledlie’s untrained white division wandered into the crater with no ladders to climb out, as the USCT had been previously trained to do. While Ledlie was reportedly drunk and hiding during the attack, his men were slaughtered in a Confederate counterattack. USCT soldiers eventually flanked to the right beyond the crater, assaulting and driving back Confederate troops often in hand-to-hand combat. Casualties were high and many of Ferrero’s division of USCT were captured.

By 2:00 p.m., after nine hours of fighting, the action was over, and on August 1, a four-hour truce allowed both sides to retrieve the wounded and killed. Partly because of the heavy causalities suffered in the Battle of the Crater, in December 1864, all USCT around Petersburg were incorporated into three division and became the XXV Corps (approximately half) of the Army of the James. The XXV Corps, some 30,000 black enlisted men and white officers, became and remained until World War II the largest concentration of black soldiers in the United States Army. Overall, these black soldiers, including those in the Petersburg Campaign, participated in six major engagements and earned 15 of the 16 Medals of Honor awarded to African American soldiers in the Civil War.

George W. Williams, A History of the Negro Troops in the War of the Rebellion, (New York, Harper & Brothers, 1997); James M. McPherson, The Negro’s Civil War: How American Negro’s Felt and Acted During The War For The Union, (New York, Pantheon Books, 1965); Dudley Cornish, The Sable Arm: Black Troops in the Union Army, 1861-1865 (Lawrence: University Press of Kansas, 1987).