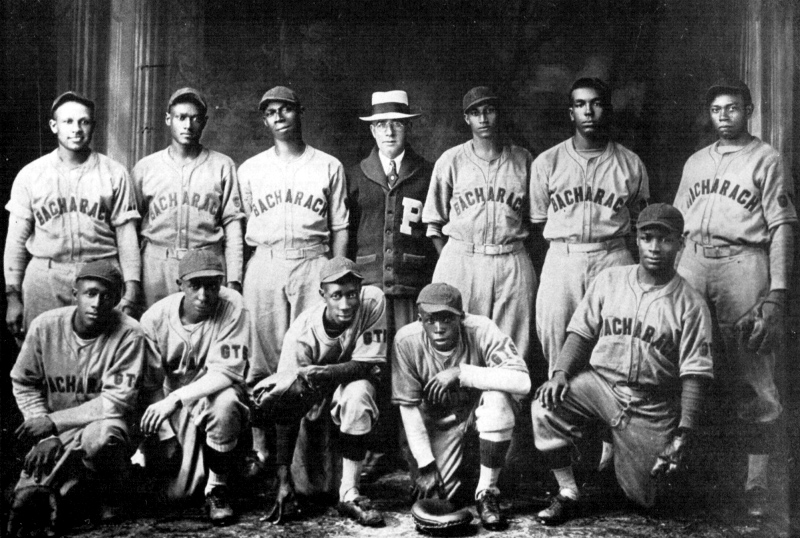 The Bacharach Giants was a Negro league baseball team first based in Atlantic City, New Jersey. The team originally were the Duval Giants out of Jacksonville, Florida but relocated to Atlantic City in 1916. They were named after the city’s mayor Harry Bacharach, and were managed by pitcher Dick “Cannonball” Redding. The roster included shortstops John Henry “Pop” Lloyd and Dick Lundy, outfielder Spotswood “Spot” Poles, first baseman Ben Taylor, Oliver Marcelle at third base, and Redding and Jesse “Nip” Winters on the mound as pitchers.

The Bacharach Giants joined the Negro National League (NNL) in 1920 as an associate member, and briefly split into two separate teams in 1922. By 1923, they reunited as one team, and the Bacharach Giants became the founding members of the Eastern Colored League (ECL). After Dick Lundy took over as manager in 1926, the team brought home two consecutive pennants (1926, 1927), but were unsuccessful in winning the Negro League World Series. Lundy brought in center fielder Chaney White, and pitchers Luther Farell, Arthur “Rats” Henderson, and Claude Grier, but the team could not pay player salaries because of low attendance at games. The Bacharach Giants played as an independent team when the ECL failed in 1928 and finished the season with a 19-45 record. They disbanded after the 1929 season.

In 1931, a white Philadelphia sporting goods storeowner and sports promoter, Harry Passon, decided to resurrect the Giants team. He took over a vacant lot at 48th and Spruce streets in Philadelphia and named it Passon Field. The new owner installed lights and seating for 6,000 fans, hoping to draw crowds. The owner of the Philadelphia Stars baseball team, Ed Bolden, argued that the city could not support two Black baseball teams, and Passon and the new Philadelphia Giants were denied membership into the Negro National League.

The League decision, however, did not stop Passon from continuing to field his team, and in 1934, the team was offered membership into the National Negro League. Passon Field was plagued by violence, and the Philadelphia Bacharach Giants withdrew from the league in 1935 but continued to play at the field until Harry Passon died in 1942. At that point they disbanded.