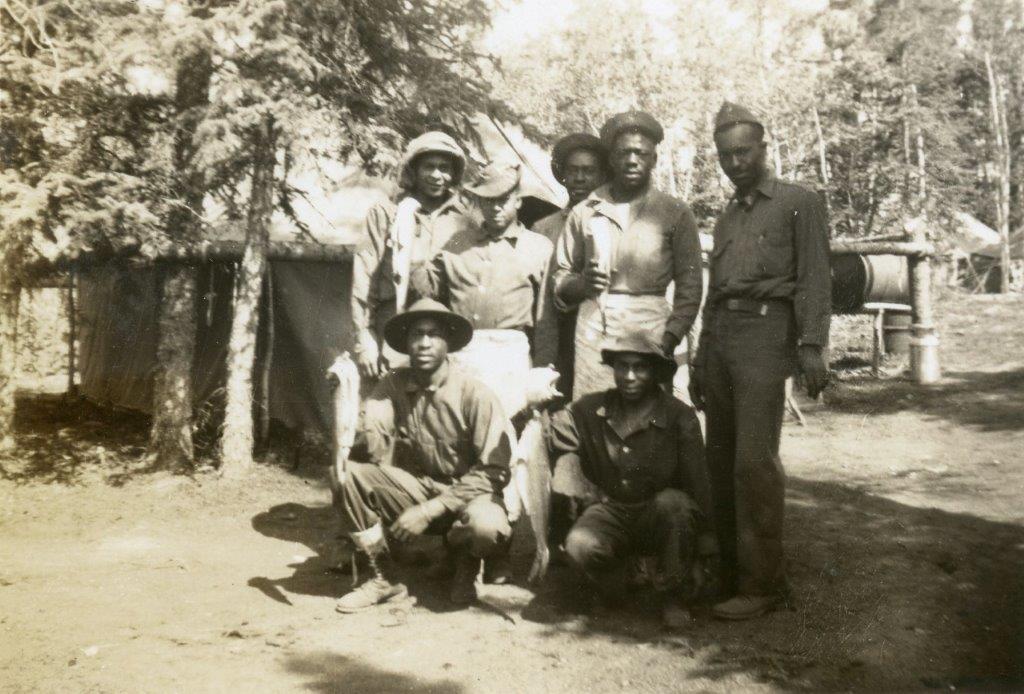 With a small cadre of white officers and Black NCOs, the segregated 93rd Engineer Battalion (600 men) was activated on February 10, 1941 and quartered in an undesirable mud-filled rear corner of Camp Livingston, Louisiana. Most of the enlisted men were from Mississippi and Louisiana. They completed strenuous basic training and were assigned to the Louisiana-Texas maneuvers where the soldiers built and repaired roads, built and demolished bridges, and constructed POW camps.

After Japan attacked Pearl Harbor on December 7, 1941, military planners at the War Department decided an overland road from the Lower 48 States to Alaska Territory was necessary to supply the area in case of what they feared was an imminent Japanese attack. Colonel William Hoge was assigned to lead Army Corps of Engineer units to build what would become the 1,500-mile Alaska-Canada Highway (ALCAN). He arrived in February 1942 at Dawson Creek, British Columbia, the southern starting point of the highway, to survey the terrain. The Corps of Engineers had given him four white regiments to complete this task. Hoge flew over the frozen ground, frozen rivers, and snow-covered mountains and realized they were not enough. His superiors gave him three additional engineer regiments and apologized that they were Black.

On April 3, 1942, the 93rd Battalion, one of the three units, was alerted for possible overseas duty. They had been assigned to Hoge’s project. Three days later they were organized into a General Service Regiment doubling the number of soldiers and adding three more companies. The following day, the new regiment boarded a train, traveled across the United States and arrived at Camp Murray, Washington where Colonel Frank Johnson assumed command of the Regiment.

In mid-April they sailed on luxury liners, slept in comfortable beds, and sat at linen covered tables enjoying meals served to them by Black waiters. They arrived at Skagway, Alaska, a small gold rush town surrounded by snow covered craggy mountains. It was 34 degrees. The 340th white Engineer Regiment arrived at Skagway also for Hoge’s project. The Black soldiers were rushed out of town on the White Pass and Yukon Railroad to Carcross, Yukon.

The 93rd built a 70-mile supply road to Teslin River and on to Teslin village. Over two months behind, Hoge ordered the 340th to build a truck trail to Contact Creek, Canada as the 93rd graded and finished the pioneer road behind them. They built 250 miles of the central portion of the Alaska Highway suffering from heat, mosquitoes, and frost bite. Canvas tents were their home and ragged uniforms their dress. They moved every three days. They also suffered from racism and doubts that they could not operate heavy equipment. The work on the road by the unit proved the Army High Command wrong.

The road completed, the 93rd bivouacked in warm quarters at Chilkoot Barracks, near Haines, Alaska. On February 27, 1943 half the regiment docked at Ft. Randall, Cold Bay, Alaska and the other half docked at Ft. Glenn, Umnak, Alaska, both in the Aleutian Islands. Their work here was even more crucial as Japanese forces had invaded and briefly occupied some of the Aleutian Islands. The unit constructed roads, airfields and Air Corps hangars. They stayed in the Aleutians until 1944 and were disbanded when World War II ended in 1945.