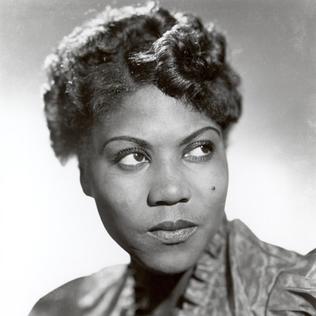 Sister Rosetta Tharpe was a singer, songwriter, and guitarist of gospel, jazz, blues, and rock-and-roll.  She was born on March 20, 1915 near Cotton Plant, Arkansas to Katie (née Harper) Bell Nubin and Willis B. Atkins.  Her mother, a mandolin-playing evangelist in the Church of God in Christ (COGIC), toured with P.W. McGhee’s revivals in the Southeast before moving with her daughter to Chicago in 1921.  There, mother and daughter performed together at the Fortieth Street Church of God in Christ (now Roberts Temple Church of God in Christ).  She also toured as a teenager with her mother as a COGIC evangelist across the country.

On November 17, 1934, at the age of 19, Rosetta Atkins married Pastor Thomas J. Thorpe, a COGIC minister.  She toured with him and her mother until 1938.  By October 1938, she had separated from her husband, moved to New York, and begun working at the Cotton Club.  She remained there until 1940.

Tharpe made her first gospel recordings for the Decca label on October 31, 1938.  Two months later on December 23, 1938 she performed at Carnegie Hall in John Hammond’s first “From Spirituals to Swing” concert, and again at the second one of 1939.

Between 1938 and 1941, she performed at various venues around New York, including the Paramount Theater, the Savoy Ballroom, and the Apollo Theater with bandleaders Cab Calloway and Louis Jordan.

During World War II, she recorded V-Discs for the Armed Forces Radio Service and appeared in the Service’s variety radio show, Jubilee.  In 1943, she spent six months in Los Angeles working first with the Lucky Millinder Orchestra and later as a soloist.  During the year she divorced Tharpe and married Foch Pershing Allen, whom she divorced in 1947. Later that year, she began working with Marie Knight of Newark, New Jersey.

On July 3, 1951, Tharpe married her third husband, Russell Morrison, in a ceremony at Griffith Stadium in Washington, D.C. before twenty thousand people.  Two years later, she recorded her first blues album with Marie Knight.  She first toured Europe between November 1957 and April 1958.  By the late 1960s, Tharpe had acquired a growing non-black audience, appearing, for example, at the Newport Jazz Festival in 1967.

She also toured Europe in 1964, 1966, and in 1970, where she fell ill in Switzerland while touring with the American Folk, Blues, and Gospel Caravan.  She returned to America and then suffered a stroke due to her diabetes.  Shortly afterwards, her leg was amputated.  Sister Rosetta Tharpe died of a second stroke on October 9, 1973 at Temple University Hospital in Philadelphia.