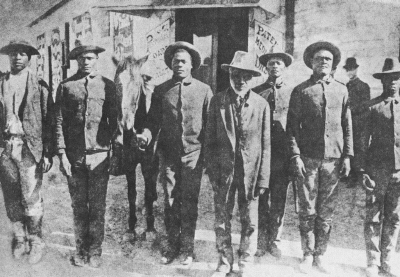 The Texas Seminole Scouts were descendants of runaway slaves who fled into Florida before the Civil War.  The offer of freedom by the Spanish greatly encouraged South Carolina and Georgia slaves to vote for freedom with their feet.  The blacks cooperated and joined the Seminoles and in some cases were “owned” as slaves by the Seminoles.  The Seminole blacks lived an essentially separate existence from the Seminole but did cooperate militarily for their mutual defense. Other Seminole blacks intermarried with the Seminole and served as advisors and interpreters.  Between 1838-1842, most of the Seminole and Seminole blacks left Florida for Indian Territory.

With an uncertain legal status and the prospects of re-enslavement, life for the Seminole blacks proved very precarious.  Many of them fled to Mexico to live as free people. While in Mexico, they served the Mexican government who needed their service in countering Indian incursions and attacks.  The Black Seminoles remained in Mexico until 1870 when the United States military officials in Texas invited them to return to the United States and serve as U.S. Army scouts.  The Black Seminole Scouts, about fifty in number, served as skilled trackers and distinguished themselves in numerous military engagements.  Their bravery was recognized and four Black Seminole Indian Scouts received the Congressional Medal of Honor. While the Black Seminole served the nation with honor, the government’s promise to provide the community food and land was never fulfilled. The unit was disbanded in 1881.

Kevin Mulroy, Freedom on the Border: The Seminole Maroons in Florida, the Indian Territory, and Coahuila, and Texas (Lubbock: Texas Tech University Press, 1993).