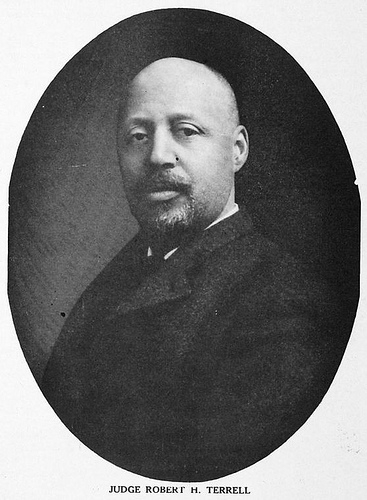 Robert Herberton Terrell, the first African American judge in Washington, D.C., was born in Charlottesville, Virginia on November 27, 1857 to Harris and Louisa Ann Terrell.  The Terrells, an upper-middle class American family, sent their son to public schools in the District of Columbia and then to Groton Academy in Groton, Massachusetts.  In 1884, Robert Terrell graduated cum laude from Harvard University.  Five years later he graduated from the Howard University Law School with an LL.B.  In 1893 he attained his LL.M from Howard University Law School.  Because of the difficulty in getting a job as a black attorney in Washington, D.C., Terrell taught in the District’s public schools between 1884 and 18. He then worked as chief clerk in the office of the auditor of the U.S. Treasury.

Robert Terrell met Mary Church when she accepted a teaching post at the Preparatory School for Colored Youth in Washington, D.C., where he was principal.  They married in October 1891 and had two daughters.  Mary Church Terrell, the daughter of Robert R. Church, a prominent Republican politician and businessman in Memphis, would soon be noted in her own right as a civil rights leader and instrumental in the organization of the Colored Women’s League of Washington.  She was also an early president of the National Association for Colored Women.

From 1892 to 1898, Robert Terrell practiced law in Washington, D.C. but returned to teaching and became principal of M Street High School in Washington, D.C.  Terrell, a staunch Republican, allied himself with Booker T. Washington in the first decade of the 20th century and through the latter’s influence with President William Howard Taft he was nominated by the President to serve on the District of Columbia Municipal Court.  Despite bitter opposition to his appointment from Southern Democratic Senators, Terrell on January 15, 1910 became the first African American judge in the nation’s capital.  Terrell served as judge until his death in 1925.

While serving as municipal judge, Terrell was also on the faculty of the Howard University Law School.  In February 1911 he was a charter member of the first Washington, D.C. chapter of Sigma Pi Phi Fraternity (the Boule), the oldest black fraternity in the nation.

Robert Terrell suffered a stroke in 1921.  A year later, he suffered another stroke leaving him paralyzed.  He died in Washington, D.C. in December 1925.