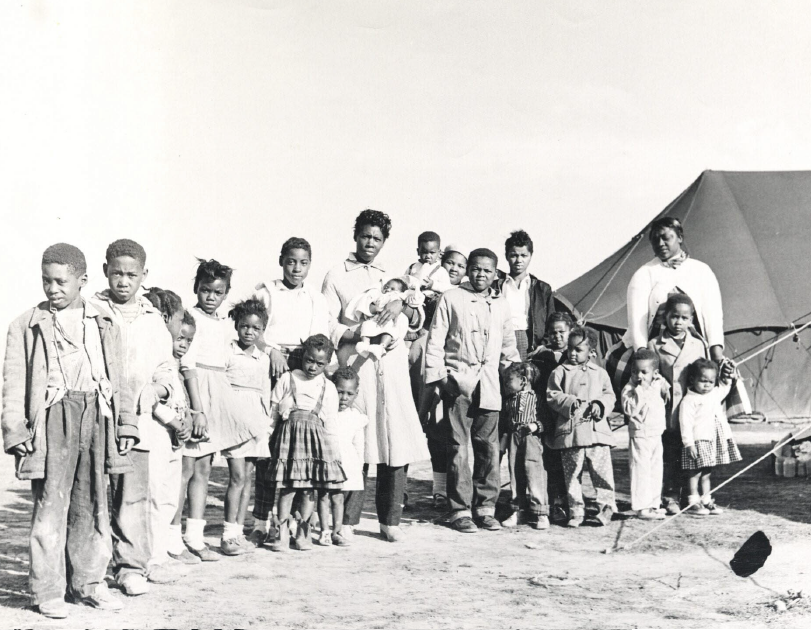 The Tent Cities of Fayette and Haywood Counties in Tennessee were the result of early efforts to register African American voters in those counties between 1959 and 1962. When John McFerren of Fayette County and other activists began their voter registration drive, many of the potential voters were sharecroppers who were evicted from white-owned farms. McFerren and other activists created homes for evicted families in surplus Army tents on the farms of black landowners Shepard Towles and Gertrude Beasley which became known as Tent City. Black families lived in these tents from December 1959 until April 1963.

Two years prior, on September 9, 1957, the Eighty-Fifth Congress of the United States enacted the first civil rights bill since 1875. The legislation encouraged the United States Government to initiate civil suits in federal courts where any individual or group was prohibited from voting due to their race. Local activist John McFerren of Fayette County and C.P. Boyd of Haywood County saw this legislation as their opportunity to get blacks on the voting rolls and in court trials as prospective jurors.

McFerren and other Fayette County activists formed the Original Fayette County Civic and Welfare League Inc. C.P. Boyd formed the Haywood County Civic and Welfare League. The main goal for both organizations was to initiate a voter registration campaign. Because local African Americans had been denied the right to cast votes in the August 1959 Democratic primary, the organizations in 1960 filed suit against the local Democratic Party. When their suit was victorious in court, many Fayette and Haywood County whites responded with economic reprisals against all local blacks. White merchants refused to sell goods and services to blacks. White physicians withheld medical care from black patients. White property owners evicted more than 400 blacks tenant families off their lands. White supremacist organizations like the Ku Klux Klan and White Citizens Council terrorized blacks in both counties.

In response, John McFerren, C.P. Boyd, and other activists set up surplus army tents on land provided by African American landowners Shepard Towles and Gertrude Beasley for now homeless families who had been evicted for attempting to vote. Those encampments later became known as tent cities of Fayette and Haywood Counties.

By 1960, the Tent Cities in Fayette and Haywood Counties started to gain national attention. On November 18, 1960, the U.S. Justice Department filed a lawsuit against thirty-six landowners who had evicted their black tenant farmers. On December 14, 1960, the Justice Department filed suit against an additional forty-five landowners, twenty-four merchants, and one financial institution in Fayette County for violating the civil rights of African Americans. On July 26, 1962, U.S. District Court Judge Robert Malcolm McRae Jr., ruled that the landowners were permanently enjoined from engaging in any acts for the purpose of interfering with the right of any person to register to vote for candidates for public office. By 1962, many African Americans including most of those forced into the Tent Cities of Fayette and Haywood Counties had registered to vote and the encampments were disbanded.