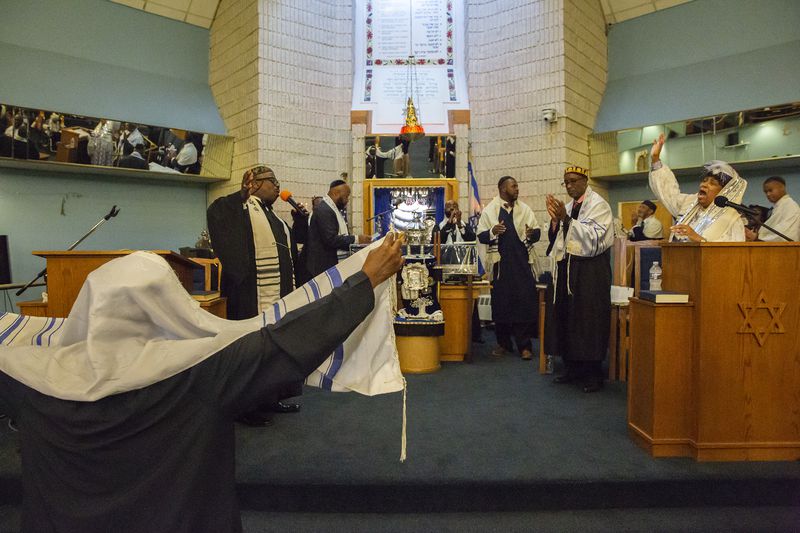 Temple Beth El is a historically, and to this day predominantly, African American synagogue located in the West Oak neighborhood of Philadelphia, Pennsylvania. Not to be confused with Ethiopian Jewish communities (most of which reside within present-day Israel), Temple Beth El was founded in the 1950s by Rabbi Louise Elizabeth Dailey, an African American woman whose father was a Baptist preacher. During a time when many African Americans were shedding Christianity as a slave religion and embracing Islam, some chose to turn to Judaism. Although originally a unique outpost kept separate from mainstream American Judaism, in recent years Temple Beth El has gained a growing acceptance from other Jewish communities in both the United States and Israel. First Lady Michelle Obama’s first cousin, Rabbi Capers Funnye, attends Temple Beth El with his family.

Rabbi Louise Elizabeth Dailey was born in Annapolis, Maryland. Although her father was a minister and the founder of the Second Baptist Church in that city, he kept many Old Testament traditions alive in their household, including keeping Shabbat and certain variations of Kosher (Kashrut) law. In the 1940s, Dailey moved to Philadelphia, finding working as a housekeeper in a Jewish family’s home. Dailey felt a strong connection, was drawn to the traditions and rituals of the family, and chose to embrace the Jewish faith. After word got out about her newfound faith, many other African Americans in the community became curious. Dailey began hosting Jewish prayer groups in her living room, the start of what eventually became Temple Beth El.

Initially, many of the African American worshippers considered themselves “children of Israel,” or believers in Jesus who still kept the sanctity of Old Testament traditions and laws. Rabbi Dailey put an end to this, and was famously quoted saying, “we’re doing away with this New Testament nonsense.” This embrace of the Jewish faith and divergence from Christianity caused a third of the congregation to leave. By the time her son reached Bar Mitzvah age, Rabbi Dailey was deeply in touch with the holiest Jewish prayer, the Shema, “Hear Oh Israel… The Lord is One.” That being said, many traditional Baptist and Pentecostal African American traditions were kept as well, and to this day services at Temple Beth El are a unique mixture between Hebrew, loud calls of “Hallelujah,” and the joyous energy of Black faith intertwined with ancient Jewish tradition.

According to a University of Southern California article from 2010, Temple Beth El is a large congregation, servicing around five hundred families, mostly of African American descent. Although originally ignored or admonished by the American Jewish community, and later the Israeli Jewish community, recent years have seen a surprising turnaround. Israeli officials and ambassadors have visited Temple Beth El, alongside outreach and acceptance from Ashkenazi synagogues and Jewish educational institutions. Today, the small African American Jewish community, which is estimated to be from twenty thousand to forty thousand in the United States, is characterized by their deep identification not only with Judaism and the state of Israel, but also with their unique and troubled history as an oppressed group as well. The African American narrative of struggle and redemption seems to relate comfortably with the struggles of the Jewish people, both biblically and more contemporarily.