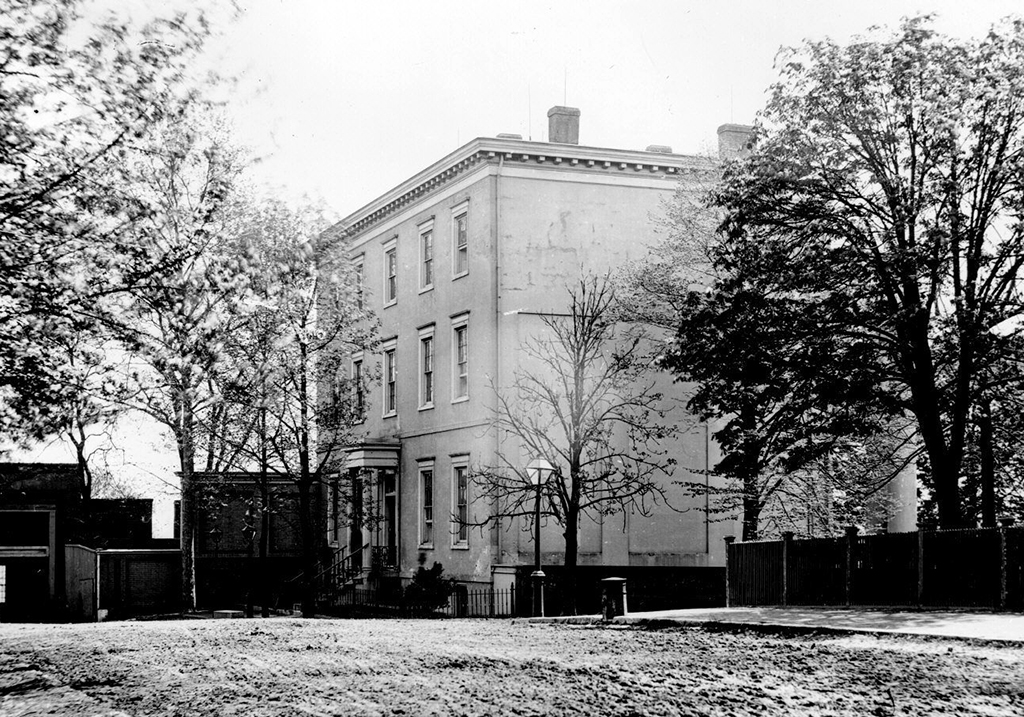 In the following account historian and novelist Lois Leveen describes how she came to write her critically acclaimed novel, The Secrets of Mary Bowser, the account of a black woman who served as a Union spy in the Confederate White House during the American Civil War.

Born into slavery in Virginia, Mary Bowser was freed and sent North to be educated, only to return to Richmond on the eve of the Civil War, where she spied on behalf of the Union by posing as a slave in the Confederate White House.  She undertook this astounding work as part of an espionage ring run by Elizabeth “Bet” Van Lew, the white woman whose family had owned Bowser.

I first learned of Bowser in the late 1990s while working on my Ph.D. in English with a specialty in African American literature, when I came across a brief reference to her espionage in A Shining Thread of Hope:  The History of Black Women in America by Darlene Clark Hine and Kathleen Thompson.  Bowser’s activities exemplified the thesis of my dissertation, which examined how the design and occupation of American domestic space has been used to assert or contest ideas about race and gender.  By pretending to conform to slaveholders’ expectations of an enslaved black woman in domestic service, Bowser rendered herself not so much above suspicion as below it.  Playing on the foundational belief of slavery—that blacks were not fully human and therefore incapable of intelligence—she became an intelligence agent who successfully undermined the institution of slavery.

As I wrote and taught about slavery and the abolition movement after completing my degree, Bowser’s story continued to intrigue me.  Why would she give up her freedom and risk her life in a war that she couldn’t be certain would end slavery?  What was the emotional cost of pretending to be a slave?  How did Bowser and Van Lew’s unusual relationship affect each of them?  Most importantly, how might Bowser’s extraordinary accomplishment as a spy serve as a hook to draw twenty-first century attention to the contributions African American women have made throughout our nation’s history?

Because the historical record offered scant documentation of Bowser’s life, I realized these questions could only be answered through an imaginative work, although to honor Bowser appropriately, I brought intense historical research to the project.  Antebellum Richmond was urban and industrialized, and in researching the lives of its free and enslaved black population, I recognized that Bowser might have been shaped by experiences similar to those of better known historical figures such as Henry “Box” Brown and Anthony Burns, both of whom were hired-out slaves in the Virginia capital before making their famous escapes from slavery.  Bowser’s migration out of Richmond, however, was quite different from theirs:  while still a child, she was sent to the North by Bet Van Lew, daughter of the family who owned her.

Most accounts of Bowser’s life suggest that she was educated in or near Philadelphia.  Although I could find no records of a Quaker school in Philadelphia that enrolled African American females during the 1850s, I knew that Sarah Mapps Douglass and Grace Mapps taught black girls in this period, providing a plausible way to frame an exploration of how a newly freed young woman such as Mary would enter Philadelphia’s vibrant and politically active African American community. Throughout the novel, I interwove historical figures like Douglass and Mapps with invented characters, even incorporating primary documents into the narrative.  For example, in one scene Mary attends a memorial service for John Brown in which she hears a sermon about Dangerfield Newby, a free black man who aided Brown at Harper’s Ferry.  The sermon quotes from actual letters written by Newby’s wife Harriet, a Virginia slave.  In telling Bowser’s story this way, I introduce generalist readers to the experiences of numerous African Americans whose lives have begun to be recuperated through the diligent work of historians.

As it turns out, the research was the easy part, at least comparatively.  I never imagined I would be a novelist until discovering Bowser’s story, and learning to write compelling fiction proved far harder than writing expository prose.  But Bowser was ever my inspiration:  I frequently reminded myself that she did the difficult and dangerous work; surely I could bear the far easier burden of spending a few more hours revising my latest draft.  In 2012, The Secrets of Mary Bowser was published by HarperCollins, and it was chosen as a Target book club selection—putting this piece of African American women’s history in the hands of shoppers who might not ever enter a bookstore, let alone an academic library.  I hear regularly from readers about how much they enjoy learning history from the novel, and those who are hungry to learn more can find a list of sources at the end of the book that includes Phillis Wheatley, Frederick Douglass, and Frances Watkins Harper.

Bowser’s story, as I’ve told it, is ultimately a tale of the power of education to change a young woman’s life, and the power of an educated black woman to change the course of history.  Nevertheless, 150 years after Bowser left Virginia to go to school, educational success remains elusive for too many young African Americans.  With input from colleagues across many disciplines, I created a Teachers’ Guide for The Secrets of Mary Bowser that includes sections on using the novel to teach school success strategies, as well as activities and assignments for linking the book to contemporary social issues, and also on using the book for introductory-level subject-based instruction across disciplines, from history and literature to social sciences to math and science to fine and performing arts.  Although the novel is written for adults, it is accessible enough for teens, and I hope that high school and college faculty will use the guide to deepen Bowser’s legacy for twenty-first century youth.

As gratifying as it is to increase awareness of Bowser’s life, it’s important to acknowledge how much the telling of her story depends on creative surmising rather than strict adherence to documented facts.  Many ostensibly nonfiction accounts of Bowser’s life make unsubstantiated claims about her—claims that, in the age of the internet, circulate widely.  In some cases, I know these claims are untrue—for example, both Bet and Mary are often described as Quakers, yet Bet Van Lew worshiped with her family at St. John’s, an Episcopal church in Richmond, and Mary was listed as a Presbyterian in a document from the 1850s.  A photograph purportedly of Bowser is widely circulated online, the provenance of which I have been unable to confirm—but which several historians I’ve consulted agree likely was taken long after 1867, when Bowser herself disappears from the historic record.  Although I include an afterword in my novel discussing the limited documentation directly related to Bowser that can be found in the historical record, I’m wary that readers may treat the book as biography.  Despite my training as a historian, in crafting The Secrets of Mary Bowser I deviated from the known facts by not including what was surely a significant episode of her life:  being sent in her early teen years to Liberia by Bet Van Lew to serve as a missionary, an experience she found so distressing she successfully implored Van Lew to bring her back to the United States.

But even on this point, Bowser offered inspiration:  my research indicates she was keenly aware of value of amending or omitting biographical facts in order to present a story to fit a particular audience.  In September 1865, the slave-turned-spy lectured in Manhattan using the pseudonym Richmonia Richards; that same month, she spoke in Brooklyn under the name Richmonia St. Pierre.  As both pseudonyms suggest, she was consciously constructing a public persona.  Although “Richmonia” spoke about her service during the war as well as her experience in Liberia, she deliberately distorted key biographical facts, crafting a story that would be especially effective for each audience.  In 1867, while using the name Mary Richards and teaching at a Freedman’s School in rural Georgia, she had a chance encounter with Harriet Beecher Stowe, Charles Beecher, and Freedman’s Bureau official Crammond Kennedy.  She impressed them with tales of her accomplishments during the war, yet she once again altered factual details about her life.

Why was she so intentionally inaccurate?  Spies, like slaves, rely on prevarication for self-preservation, and she continued this habit with good reason even after the war.  Letters she wrote in 1867 to the superintendent of education for the Georgia Freedman’s Bureau, which detail her concerns over the danger that hostile whites posed to the black community, underscore how her post-war secrecy may have been part of a calculated survival strategy.  This, then, is the final lesson Bowser offers:  having earned a place in history as a spy whose race, gender, and presumed class allowed her to hide in plain sight, she remains elusive.  Fascinating yet frustratingly obscured to us, Mary Bowser is still keeping her own secrets.  In imagining her life in The Secrets of Mary Bowser, I hope I’ve paid worthy tribute to her astounding contributions to ending slavery, despite the scant details of her life documented in known historical records.