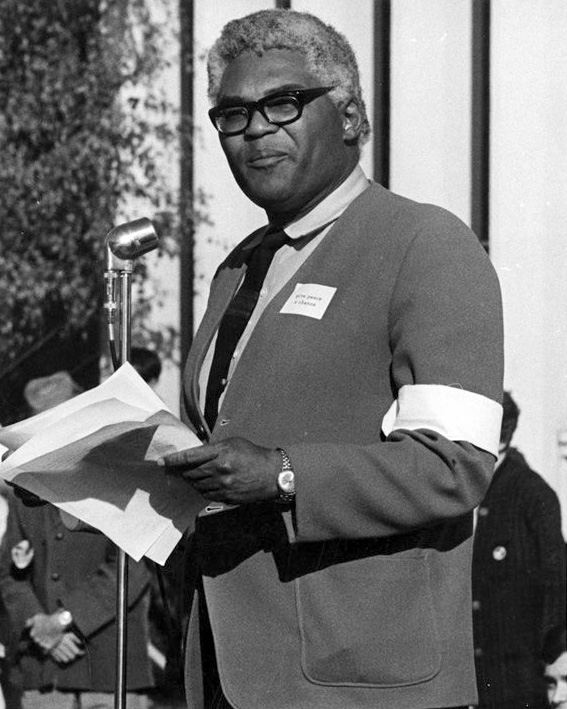 In the account below, Jim Kershner, author, historian, and longtime journalist for the Spokesman-Review, Spokane’s major daily newspaper, discusses what led him to the story of Carl Maxey, one of Washington State’s key 20th century civil rights figures, and the challenges he encountered while writing Carl Maxey: A Fighting Life which was published in 2008 by the University of Washington Press:

Carl Maxey was legendary to those of us in the newsroom of The Spokesman-Review in Spokane, Washington in the 1990s. He was a civil rights attorney, political firebrand, and all-around gadfly to the local and statewide establishment. He had been in the middle of every local civil rights story, and a few national stories as well, since the 1950s. To top it off, he was a bona fide sports hero in a city starved for sports glory (he won the NCAA boxing championship in 1950). So in 1997, when I began working on a multi-part history feature titled, “Segregation in Spokane,” I knew that Maxey would be my most essential source. He had grown up in Spokane during the Great Depression and he would be able to vividly describe the region’s particular brand of de facto segregation. Even better, he could describe how that system was dismantled, because he was the man who had largely dismantled it. He had employed a mix of principled persuasion and lawsuits to force an entire region to, essentially, do the right thing.

When I interviewed Maxey in April 1997, the grey-haired 72-year-old was predictably sharp and acerbic about those days, recalling getting repeatedly tossed out of the city’s amusement park, even on nights when the bandstand entertainer was Fats Waller or Duke Ellington. He was also full of stories about taking restaurants to court, going after social clubs where it hurt them most (their liquor licenses) and heatedly debating the practice of redlining with the local real estate leaders. He was still full of disdain for certain hotels and restaurants, not because they still discriminated, but because they had dragged their heels so stubbornly 40 years earlier. And then, in the middle of the interview, he said this, “But you know, to really understand this story, you have to know where I come from.”

And with that, Maxey started telling me his life story. Now, as a reporter with a deadline, my knee-jerk reaction was probably, “That’s great, but I can’t use it. I’m not writing your life story.” Fortunately, I did not say this out loud, because another thought soon crowded it out: “If Carl Maxey wants to tell me his life story, then I need to shut up and listen. And keep that tape recorder running.”

The story he told that day was absolutely stunning. He was a 12-year-old orphan in Spokane in 1936, when the orphanage kicked him out, along with the only other “colored” orphan. Maxey was able to quote the minutes of the orphanage board meeting verbatim: “The board (goes) on record as voting to have no more colored children in the Home, from this time forward. Motion carried – unanimous.” No other orphanage in Spokane would subsequently take these young two boys. Then Maxey said to me, “If you wonder where some of my fire comes from, it comes from a memory that includes this event.”

At that moment, I realized that Maxey’s life story had an uncommonly compelling dramatic arc. How does a child survive the worst possible start in life? And then, how does that child grow up to become the man whose bronze bust in the Gonzaga Law School library reads, “He made a difference”? At the time, I still had no idea how Maxey made that journey, but I knew it would be a great story. Then, after Maxey committed suicide a little more than two months after our interview, I knew that the story had just become even more dramatic and complex.

A few months later, I went to the Pacific Northwest History Conference and delivered a talk about “Segregation in Spokane.” At the end of the session, I pointed out that one of the key sources, Maxey, had just committed suicide. A hand shot up in the audience. A woman said, “Is anybody writing his biography?”

I was taken aback. I did not believe I was the right person for this project, for several reasons. First of all, there were dozens, probably hundreds, of people who knew Carl Maxey better than I. Second, I was a white humor-columnist/arts-writer without particularly deep connections in the local African American community. Third, I had never written a biography. My sole qualification, I told myself, was simply that I had been the last person to interview him. So I waited for some other writer or scholar to pounce on the story. A year went by and it became clear to me that nobody else was going to do it. Meanwhile, I had never forgotten hat question from the audience: “Well, why don’t you?”

It gradually dawned on me that maybe I was the person to do it. I had, in fact, written extensively about Spokane’s black history and I had collaborated with plenty of people in Spokane’s black community. Most crucially, I came to realize that writing a biography was similar to what I did every day as a journalist. I did not have to be the person who knew Carl Maxey best; I just had to find the people who did. Then, after learning everything they knew, I had dig for information that even they didn’t know. Finally, I just plain knew in my bones, that I would be a fool not to grab this chance. It was a story that came around once in a lifetime.

Once I resolved to write the book, I knew that my main challenge would be the obvious one: Maxey was no longer available for questions. Yet I still had my copy of that fateful last interview.  I also discovered that both his first wife and his widow were willing, and even eager, to tell me everything they knew, without asking for editorial control. His two grown sons were also willing to share their memories. So were many, many people who knew him well. Finally, Maxey had never been shy about publicity and had been quoted in hundreds of newspaper articles (no wonder he was a legend in our newsroom) and had been profiled numerous times. His voice also lived on in copies of his speeches and in voluminous trial transcripts.

However, all of these sources illuminated his life only after he became a public figure. Even his wives knew little about his childhood. There were times when I wasn’t certain that I could adequately bring that essential part of the story to life.  I was fortunate enough to find the records of the orphanage, the Spokane Children’s Home, in our local museum archives. Yet it was only when I tracked down and interviewed Milton Burns, who was the other “colored” orphan who had been kicked out, did I believe I could adequately portray this part of the story. Burns turned out to be the most insightful possible source. He was Maxey’s best friend at the orphanage, and the only person to share Maxey’s unusual journey after the orphanage: A year in the county’s juvenile detention center, a rescue by an enlightened Jesuit priest, and an unlikely blossoming, intellectually and academically, at the priest’s Coeur d’Alene Tribe mission school.

Once I finished the chapters on his childhood, I set the story aside, convinced that I had already written its best parts. The rest, I thought, would be relatively dry legal history about his court cases. Was I ever wrong. Every time I sifted through an archive or a newspaper morgue, I found another compelling chapter of Maxey’s life. Maxey spent Freedom Summer, 1964, in Mississippi. Maxey defended the Seattle Seven, an anti-Vietnam-War group whose trial ended with a chair-tossing melee in a federal courtroom. He defended Ruth Coe, mother of notorious serial rapist Kevin Coe, in a case the judge declared to be a “Greek tragedy.” The story just kept getting better and better.  In 1970 he represented the anti-war wing of the Democratic Party when he challenged Washington’s longtime incumbent Senator Henry M. (Scoop) Jackson

Yet I knew I had already wasted too much time. Maxey’s contemporaries were dying off. Milton Burns, in fact, died not long after I interviewed him. Pushed into action, I took a three-month sabbatical from my newspaper job and finished the final two-thirds of the book. I felt like a surfer who had caught an amazing wave, my job was just to ride it without taking a pratfall.

Carl Maxey: A Fighting Life was published in 2008 by the University of Washington Press. When I did my first reading, at Spokane’s main independent bookstore, it became abundantly clear that this project had been important to more people than I could have imagined. I lost count of the number of people who came up to me and thanked me, voices cracking with emotion, for seeing the project through. They believed that Maxey deserved the kind of recognition that only a biography can bring. As for me, the book remains, despite its flaws, the most satisfying project of my professional career. Ever since that long-ago interview, I never doubted, not even for a second, that this was a remarkable story that someone had to tell.