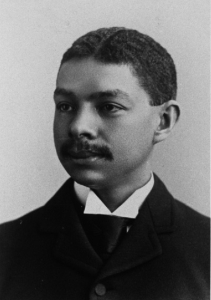 Architect and educator Robert Robinson Taylor was the first African American to graduate from the Massachusetts Institute of Technology (MIT).  He is the father of architect and Chicago, Illinois business leader Robert Rochon Taylor (1899-1957) and the great-grandfather of Valerie Jarrett (1956-  ), senior advisor to President Barack Obama (1961-  ). With a professional career as an architect and instructor that spanned four decades from 1893 to 1933, Taylor influenced generations of future African American architects in the United States.

Robert Robinson Taylor was born on June 8th, 1868, in Wilmington, North Carolina. His father, a carpenter, and his mother were former slaves. Taylor’s earliest formal education occurred at Wilmington’s Williston School and the all-black Gregory Normal Institute (1868-1921), sponsored by the American Missionary Association (1846-?).  He entered MIT’s School of Architecture in 1888 and in 1892 was MIT’s first black graduate.

Upon graduation, Taylor was recruited by Booker T. Washington (1856-1915) to serve as the Tuskegee Institute’s campus architect, planner and construction supervisor, serving at the Alabama school for nearly 40 years until 1933.  Taylor is often credited with constructing what observers saw as a beautiful and sound campus. Built between 1895 and 1898, Butler Chapel is considered to be his finest achievement and, along with his nine other campus buildings, was thought to be symbolic of the success of industrial education at Tuskegee.

After leaving Tuskegee in 1900 to serve as an architectural draftsman in Cleveland, Ohio, Taylor was again recruited by Booker T. Washington in 1904 to return to the campus, serving as the director of the Mechanical Industries Department.  In 1913, Taylor was appointed to be one of five directors of the Negro Farmer (1914-1965), a new Tuskegee-based periodical.  By 1925, Taylor was promoted to vice-principal of Tuskegee Institute.  Taylor traveled to Kakata, Liberia in 1929 to design the Booker T. Washington Institute in accordance with the beliefs of industrial education.

After retiring from Tuskegee in 1933, Taylor moved back to Wilmington, North Carolina, where he served as a trustee for Fayetteville State Teachers College.  Robert Robinson Taylor died of a heart attack at the age of 78 while visiting Tuskegee’s Butler Chapel on December 20, 1942.