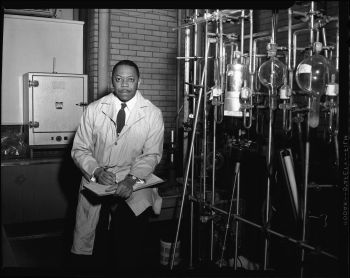 Moddie Daniel Taylor, a chemist by training, was a member of the small, elite group of African American scientists who worked on the Manhattan Project, the code name for the top-secret effort to create an atomic bomb during World War II.  Taylor was born in Nymph, Alabama on March 3, 1912, the son of Herbert L. Taylor and Celeste (Oliver) Taylor.  The Taylors later moved to St. Louis where Herbert worked as a postal clerk.  Moddie Taylor attended Charles H. Sumner High, graduating in 1931.  He then attended Lincoln University in Jefferson City, Missouri where he majored in chemistry.  Taylor graduated in 1935 as the valedictorian of his class.

Moddie Taylor began his teaching career at Lincoln University the same year, working as an instructor until 1939 and then as an assistant professor from 1939 to 1941 while enrolled in the University of Chicago graduate program in chemistry. He received an M.S. from the University in 1939 and a Ph.D. in 1943.

Taylor married Vivian Ellis in 1937.  The couple had one son, Herbert Moddie Taylor.

Moddie Taylor went to work on the Manhattan Project in 1945 at the University of Chicago. His worked as an associate chemist for the project for the next two years, involved in analyzing rare earth metals, elements of which are the products of oxidized metals and have special properties and important industrial uses. His contributions to the project earned him a Certificate of Merit from Secretary of War Robert P. Patterson in 1946.

In 1946 Taylor returned to Lincoln University for two years before becoming a chemistry professor at Howard University and the chair of the department in 1969. His research at Howard included the study of the vapor phase of dissociation of some carboxylic acids, which resulted in a grant in 1956 from the American Academy of Arts and Science.

In 1960, Taylor’s textbook, First Principles of Chemistry, was published.   It soon became one of the major texts in use in colleges and universities throughout the United States. Also in 1960, he was selected by the Manufacturing Chemists Association as one of the nation’s six top college chemistry professors. In 1972 Taylor was given the Honor Scroll from the Washington Institute of Chemists for his research and teaching.