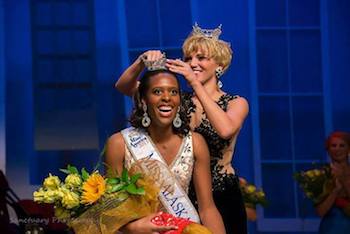 Michelle Taylor is a 22 year old African American woman who was crowned Miss Alaska in 2013. Taylor was the first black woman to hold that title. After winning the title of Miss Alaska, she went on to compete in the national contest in Atlantic City, New Jersey.

A native of Anchorage, Alaska, Taylor attended the University of Alaska at Anchorage at the time of the pageant where she majored in hotel and restaurant management.  Her childhood ambition, however, was to be a gymnast.

Taylor’s exceptional academic ability was evident long before she began college. While in high school, she was awarded $11,000 for graduating in the top ten percentile of Alaskan high school students.  Because of her strong academic ability Taylor received financial aid and scholarship offers from a number of colleges and universities, but decided on the University of Alaska at Anchorage because of its generous scholarship offer as well as her proximity to family and friends.

As a child, Taylor and her four siblings were home schooled. Because of this, her parents enrolled her brothers and sisters in more extracurricular activities than most students who attended public school.  All the siblings played tennis, took piano lessons, and volunteered for numerous charity and civic projects in and around Anchorage.  According to Taylor, being homeschooled was a positive experience for her entire family in that it led them to be more involved in the local community than many of their neighbors.  Taylor also credits this involvement as crucial in developing a strong level of social consciousness in her and her siblings.

With the encouragement of a family friend who was crowned Miss Alaska 1987, Taylor decided to pursue the title. She first entered the Miss Anchorage Scholarship Pageant in 2012 where she placed as first runner up. Disappointed, she took the experience as motivation to improve in the areas she felt she had fallen short. Her second attempt was successful as she was crowned Miss Alaska 2013.

Taylor’s platform at the 2013 Miss America Pageant was “Youth Involvement in the Political Process.”  She chose this issue due to her passionate belief that it is crucial for young people (Millennials) to be involved and concerned about the political process even before they are old enough to actually vote.

Taylor’s victory was not without controversy.  She received negative comments from some Alaskans who resented a black woman representing their state in the Miss America contest.  A much larger number of Alaskans supported her as Miss Alaska.

After graduating from the University of Alaska in 2013 she spent a year in an apprenticeship program acquiring firsthand experience about the hotel management business.