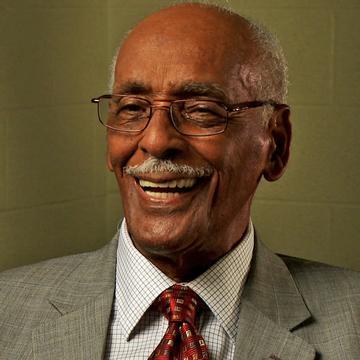 Dr. Julius Taylor
Fair use image
This entry is sponsored by Quintard Taylor

Julius Henry Taylor was an American physicist, scholarly publisher, physics professor, and one of the first African Americans to receive a Ph.D. in physics in the nation. Taylor was born on February 15th, 1914, in Cape May, New Jersey, to his parents Julia Taylor and Coleman Taylor. Taylor grew up with his five siblings, Morris, Margaret, Coleman, Elizabeth, and Mildred Taylor in a poor household in New Jersey, as his parents were brick masons and house builders.

Taylor first found success as an active member of his high school’s band and sports programs, where he played the trumpet and competed with his school’s basketball and track teams. With no intention of moving on to any higher education, Taylor graduated from Middle Township High School in 1932. After graduation, Taylor met his future wife, Patricia Spaulding, who implored him to attend college. Because of this push, Taylor enrolled at Lincoln University in Pennsylvania, paying for his tuition from the money he received playing trumpet in his band. Taylor married Spaulding in 1937, and together they had two children, Trena Taylor Brown and Dwight Spaulding Taylor.

One year after Taylor’s marriage, he graduated with a bachelor’s degree in chemistry. Because Taylor believed he would teach high school science, he enrolled in the University of Pennsylvania, where he took numerous physics courses. Taylor however realized he found what he loved and eventually earned a Ph.D. in solid state physics in 1947. Taylor was the first African American to receive a doctorate in this field at the University of Pennsylvania, and one of the first African Americans to accomplish this nationwide.

Before receiving his final physics degree, Taylor began his career by working for the U.S. Navy where he published his first scholarly papers. In 1945, Taylor became the chairman of the Department of Physics at West Virginia State College, and in 1948, one year after completing his Ph.D., joined Dr. Martin David Jenkins, president of Morgan State University in Baltimore, Maryland, to begin building the university’s physics department. In 1954 Taylor became the first chairperson of the physics department he helped create.

In 1955, Taylor edited the book The Negro in Science, which recognized the many African American contributions to the sciences. During the rest of Taylor’s career at Morgan, he persuaded the Goddard Space Flight Center, the National Science Foundation, and numerous other scientific foundations to work with the physics department at Morgan State. Taylor also established the university’s first golf team. Taylor was an avid golfer up until his final years. He retired from full time teaching in 1986 but continued lecturing part time until 1999.

Taylor remained active in his community and field after his retirement, continuing his research on x-ray diffusion and properties of semiconductors. He published numerous papers in various scientific journals, including Physics Today and mentored many children, especially children of color, in the field of STEM. Dr. Julius Henry Taylor passed away on August 27, 2011 in Baltimore, Maryland. He was 97 years old at the time of his passing.