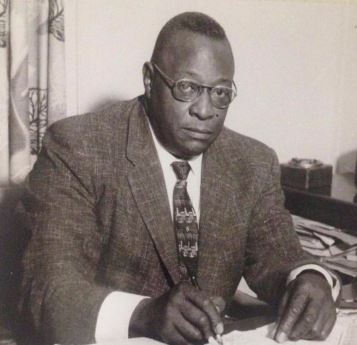 Entrepreneur, millionaire, and political activist, Hobart T. Taylor was born in 1890 in Wharton, Texas, to Millie (Wright) and Jack Taylor. Jack Taylor, a former slave, who had become an entrepreneur and landowner, had acquired 2,000 acres of farmland in Fort Bend and Wharton Counties by the time of his death in 1895 when Hobart was five. Hobart Taylor completed high school in Wharton in 1913 and attended Paul Quinn College in Austin and later, Prairie View A&M University in Prairie View, Texas where in his senior year (1917) he was captain of the baseball team.

After graduating from Prairie View, Taylor went to insurance school and secured his first job at Standard Life Insurance Company of Atlanta.  There, he became the first salesman to write one million dollars worth of business in a single year.  When the insurance business declined in Texas during the Great Depression, Taylor marshaled his entrepreneurial skills and money inherited from his father into a Houston taxi cab franchise he purchased in 1932.  Although restricted to the black neighborhoods by the Jim Crow laws of Texas, Taylor’s taxi business thrived particularly as thousands of African Americans migrated into Houston during World War II and the 1950s.  By the time of his death in 1972, Taylor’s taxi cab business had grown into a multi-million dollar financial empire which now included real estate and oil wells.

Hobart Taylor Sr. also was a political and community activist who in the 1930s and 1940s played an important role in helping to finance the court cases brought by black Houstonians to declare the Texas White Primary unconstitutional in 1944.  He was also one of the first major contributors to the United Negro College Fund (UNCF) when it began in 1944.  Four years later Taylor provided financial support for Lyndon Baines Johnson in his successful U.S. Senate campaign in 1948.  Johnson in turn appointed Taylor as a Texas delegate to the 1956 National Democratic Convention.  In 1960, Hobart Taylor, Sr., and his son, prominent Detroit attorney Hobart Taylor, Jr., became early supporters of Johnson’s bid for the Presidency.

Andrew Webster Jackson, A Sure Foundation and a Sketch of Negro Life in Texas (Houston: No Publisher Given, 1940); Louie Robinson, Jr., Black Millionaires (New York: Pyramid, 1972), Richard L. Zweigenhaft and G. William Domhoff, Diversity in the Power Elite: How It Happened, Why It Matters (New York: Rowman & Littlefield, 2006;  Handbook of Texas Online, http://www.tsha.utexas.edu/handbook/online/articles/TT/fta30.html