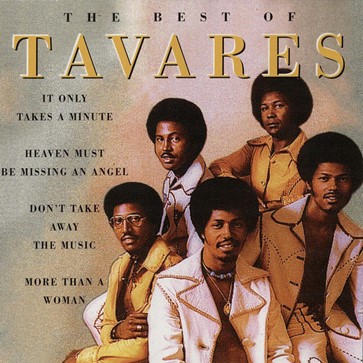 Tavares, a band of brothers, was a rhythm and blues and funk and soul group. They have also been known as The Tavares Brothers of Cape Verdean heritage (near Senegal) and Chubby & The Turnpikes. They comprised six of seven sons and one daughter of Feliciano Vierra Tavares, Sr. and Albina Gomes Tavares. They are Antone Laurence “Chubby” Tavares, Perry Lee Tavares, Feliciano Vierra Tavares, Jr., and Ralph Vierra Tavares. They were all raised in New Bedford, Massachusetts, and Providence, Rhode Island. Later members were Victor Earl Tavares and Arthur Paul Tavares.

The brothers grew up in the Fox Point community of Providence and attended Roger Williams Middle School in South Providence. However, the family ensemble began in 1959 as Chubby & The Turnpikes, and the formal organization of the group as Tavares came in 1969. During that time, the ensemble also had a white percussionist, Joey Kramer. Tavares had a doo-wop sound with a Cape Verdean flavor that lingered from the folk songs taught to them by their grandmother, while their older brother John schooled them on doo-wop technique and singing.

Tavares was popular in New England and a sought-after ensemble of singers and instrumentalists. In 1967, they were the opening act for the O’Jays at the popular Basin Street club in Boston, Massachusetts. In 1971, legendary dancer/actor Lola Falana invited Tavares to open her show in Milan, Italy. Two years later, in 1973, the single “Free Ride” was a top 15 U.S. hit and reached no. 14 on the Billboard Hot 100, no. 10 on Cash Box, and went no. 8 in Canada.

In 1974, Tavares released their debut album, Check It Out, and that year the ensemble scored its first single hit, “She’s Gone.” The song peaked at no. 1 on Billboard’s R&B chart. “Remember What I Told You to Forget” (1975) was their biggest hit, and the album In the City was successfully charted as a Top 40 Pop album that year with the single “It Only Takes A Minute” that reached no. 10 in the American pop chart. On the U.S. Disco chart, the song peaked at no. 2 and stayed there for five weeks.

In 1979, at the 22nd Annual Grammy Awards, Tavares won a Grammy based on “Saturday Night Fever! The Original Movie Soundtrack” that included Tavares’ “It Only Takes a Minute” and “Heaven Must Be Missing an Angel.” Selling 15 million copies, it was one of the best-selling albums of all time.  In 2013, the family of musicians were honored during the Third Annual National R&B Music Society’s Black-Tie Gala & Award Ceremony at Resorts Casino Hotel in Atlantic City, New Jersey, with a Lifetime Achievement Award. The following year, 2014, Tavares was inducted into the Rhode Island Music Hall of Fame.