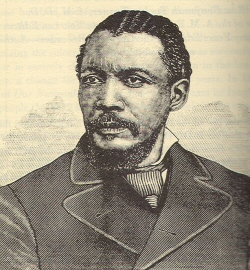 Benjamin Tucker Tanner was born on Christmas day of 1835 to Hugh and Isabella Tanner of Pittsburgh, Pennsylvania.  As one of twelve children he brought income into the Tanner household by delivering newspapers at age nine.  In 1852 Tanner was accepted into Avery College, a training school for black youth in Allegheny City, Pennsylvania.

At Avery, Tanner met and in 1858 married fellow student Sarah Elizabeth Miller. They had four children including Henry Ossawa Tanner, the first African American artist to achieve national acclaim, and Halle Tanner Dillon Johnson, one of the first black women physicians in the United States. Benjamin Tucker Tanner continued his own education at Western Theological Seminary in Allegheny City from 1857 to 1860.  He received a Doctor of Divinity degree from Wilberforce College in 1878.

Benjamin Tanner joined the African Methodist Episcopal (AME) Church in 1856.  Two years later, while at Western Theological Seminary, Tanner was given a license to preach.  In 1860 he received his pastoral certificate and two years later founded an AME Church in Washington, D.C.  Always an advocate of education, he established the nation’s first school for freedmen in the United States Navy Yard in Washington, D.C. and later managed freedman’s schools in Frederick County, Maryland.

In 1868 Benjamin Tanner was elected Secretary of the AME General Conference and named editor of its publication, Christian Recorder, which soon made the largest black-owned periodical in the nation.  In 1884 Turner became the editor of a new AME newspaper, AME Church Review.  Four years later he was elected a bishop of the AME Church.  Tanner wrote a number of books including An Apology for African Methodism (1867) which was highly regarded among contemporary American scholars of religion, and Outline and Government of the A.ME. Church (1883)