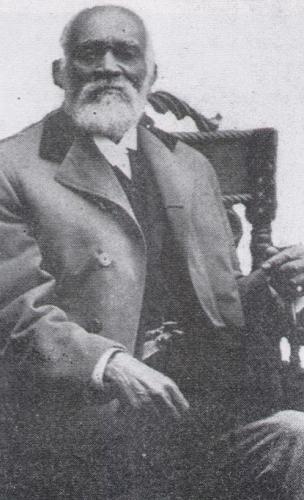 Charleton Tandy was born in Kentucky in 1836 to parents who were free only because his grandparents had purchased the family’s freedom three years before his birth.  Throughout his childhood, Tandy’s family worked to free slaves through the Underground Railroad, and as a young man, Tandy often led slaves on the route from Covington, Kentucky, to freedom in Cincinnati, Ohio.  Tandy moved to St. Louis in 1857 and worked a series of jobs until the Civil War began, when he became post messenger at Jefferson Barracks.  The war proved good for Tandy’s standing, as he rose from state militia volunteer to captain of “Tandy’s St. Louis Guard,” an African American state militia that he recruited; he carried the honorific “Captain” for the rest of his life.

His service earned Tandy the notice of several political leaders, and Tandy was able to turn his connections into patronage jobs.  His positions ranged from U.S. land agent and deputy U.S. Marshal in New Mexico and Oklahoma to Custodian of Records at the St. Louis courthouse.  At heart, Tandy was a civil rights activist.  Throughout his life he worked on local issues of interest to Missouri African Americans, including fighting school and transportation segregation.

In 1879, Tandy was the first St. Louisan to aid the Exodusters, African American migrants who were leaving the post-Reconstruction South for homes in Kansas.  After the penniless refugees arrived in St. Louis from homes in Louisiana and Mississippi, Tandy organized the Colored Refugee Relief Board.  For the next two years the group fed, clothed, housed, and bought passage to Kansas for approximately 10,000 migrants.  In addition, Tandy publicized the Exodusters’ plight, by speaking in New York, Boston, and other cities, meeting with President Rutherford B. Hayes, and testifying before Congress.

Tandy died in St. Louis in 1919.  In 1938 Charleton Tandy Community Center and Park in St. Louis was named for him.