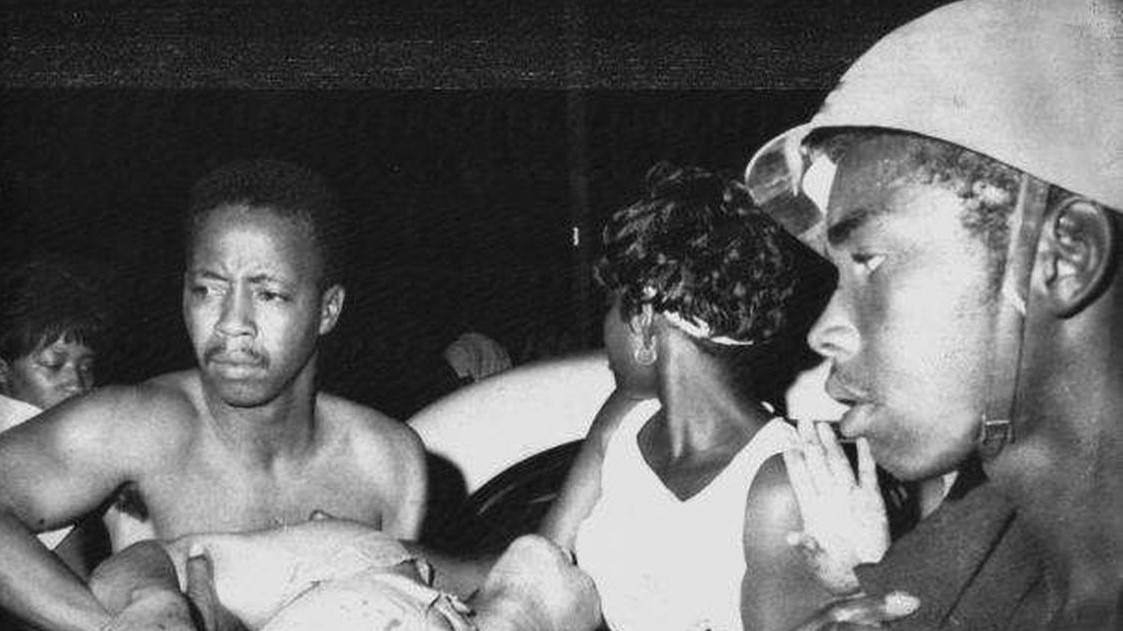 Members of the youth group known as the White Hats help disperse a crowd that gathered after a women was stabbed during a family argument. The White Hats, brought together by leaders of the Tampa Bay black community, helped calm the Central Avenue area following the 1967 Tampa Bay riots
Image Courtesy: Tampa Bay Times, Fair use image

The Tampa Bay Race Riot was one of dozens of race riots that occurred in U.S. cities during the spring and summer of 1967. The riot took place between June 11 and June 14, 1967 after nineteen-year-old Martin Chambers who was a suspect in the robbery of a camera store in Tampa, was killed by the Tampa police. Chambers was seen running from the police near Nebraska and Harrison Streets and was shot in the back by Police Officer James Calvert. He later died. Following the incident, a riot broke out along Central Avenue.

On the afternoon of June 11 Officer Calvert pursued Chambers and two other young men who he suspected had just robbed a local photo supply store. Calvert chase Chambers and shot him, claiming that he would not stop when ordered to do so. According to newspaper accounts Calvert said he aimed for Chambers’s shoulder but missed. When news of the shooting spread around the Tampa Black community, Black residents began a peaceful protest in the afternoon that turned to rioting and looting that night along Central Avenue, the heart of Tampa’s local Black community. Often called the “Harlem of the South” because of its many nightclubs that hosted top Black entertainers from across the nation, Central Avenue also was home to more than 100 stores, shops, and restaurants.

During the riot, arsonists specifically targeted white-owned Central Avenue businesses while a crowd of 400 rocked an occupied police car yelling “Kill them” until police reinforcements arrived. Another 100 people surrounded the Tampa municipal bus barn and threatened to burn it to the ground.

A two-day investigation by the Hillsborough County District Attorney’s office declared the shooting was justified. Florida State Attorney General Paul Antinori would also claim after his office investigated the incident, that the use of deadly force against unarmed Chambers was justified because he was a known felon evading arrest. Although Chambers never experienced a trial for the camera store robbery because of his death at the hands of police, Antinori asserted that people who broke the law had to accept the risk that law enforcement would use force.