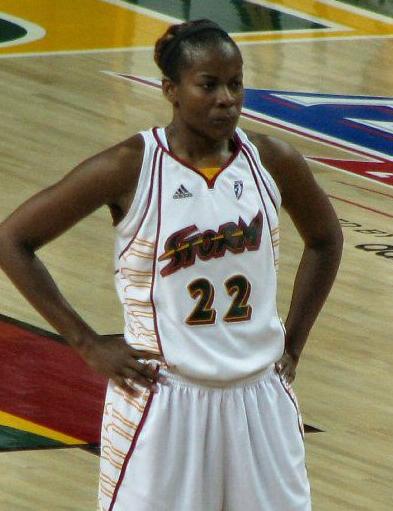 Sheryl Denise Swoopes is a retired American professional basketball player. She was the first player to be signed by the Women’s National Basketball Association (WNBA) when it was formed in 1997. During her fourteen year WNBA career, she was a four-time WNBA champion and three-time Olympic gold medalist. She was nicknamed the female Michael Jordan because of her offensive and defensive skills on the court. Swoopes was also the first woman to have a Nike shoe named after her.

Sheryl Swoopes was born on March 25, 1971, in Brownfield, Texas. She was raised by her single mother, Louise Swoopes, and played basketball with her older brothers at a young age.

Swoopes graduated from Brownfield High School where she played high school basketball, and then attended South Plains Junior College where she was named Junior College Player of the Year in 1991. Swoopes transferred to Texas Tech University where she began to gain national recognition. During her time playing for the Texas Tech Lady Raiders basketball team, she set several records, including scoring one thousand points in forty-six games, the most points per single game which was twenty-six points, and her best free-throw percentage which was .84 percent. In 1993 Swoopes helped the Texas Tech Lady Raiders win NCAA Women’s Basketball Championship during her senior season when she scored forty-seven points against Ohio State University.

In 1997 Swoopes became the first player to sign to the WNBA where she played with the Houston Comets. Swoopes helped the Comets to win four straight WNBA championships from 1997 to 2000. In 2000 she won her first of three WNBA Most Valuable Player Awards, and that same year she helped USA Women’s basketball team win gold at the 2000 Summer Olympics in Sydney, Australia. Swoopes won two more WNBA MVP Awards during her career in 2002 and 2005. After playing eleven years with the Houston Comets, Swoops joined the Seattle Storm in 2008 but was dropped from the team the following year. She played with the Tulsa Shock in 2011, her final year playing in the WNBA.

In 2013 Swoopes became head coach of the Loyola University of Chicago women’s basketball team. In April 2016, after ten of the players on her team were transferred or released from their scholarships, an investigation ensued in which Swoops was accused of mistreatment. On July 4, 2016, Loyola University Chicago fired her as the result of the investigation. Despite the scandal, Swoops in 2016 was elected in the Naismith Memorial Basketball Hall of Fame.

Swoopes was married to her high school sweetheart, Eric Jackson, from 1995 to 1999, and they had one son, Jordan Eric Jackson. In 2005 Swoopes made headlines when she announced that she was in a relationship with Alisa Scottie Scott, an assistant coach of the Houston Comets, revealing that she was bi-sexual. The couple broke up in 2011, and later that year she became engaged to Chris Unclesho.