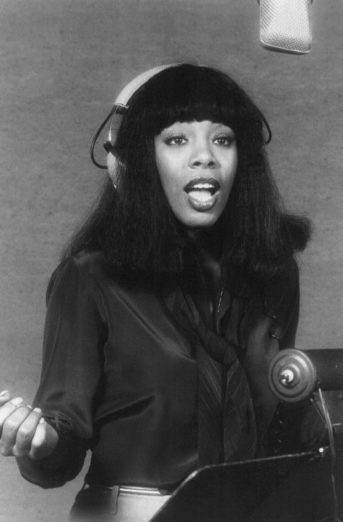 Donna Summer, a five-time Grammy winner, was born LaDonna Adrian Gaines on December 31, 1948, in Boston, Massachusetts, to Andrew and Mary Gaines. Her father, a butcher, and her mother, a schoolteacher, were parents to seven children. Her experience singing in a church choir was enough to convince her to make a career out of singing. In high school she sang with a collegiate group, and right before she was scheduled to graduate, she went to New York and auditioned for the musical Hair. Her parents were supportive of her decisions, although they recognized the value of education.

Her role in Hair took her to Europe, were she met Hellmuth Sommer, an Austrian actor. They got married in 1972 and had a daughter, Mimi, but their marriage was short lived, although Summer maintained that they continued to be friends. She kept his name after they divorced. In Europe, she worked in musical theater and also performed with Viennese Folk Opera. By the end of her residency in Europe, she was fluent in German.

Sommer had two successful records in Europe, although they had a continental sound that would not do well in America. She returned to the United States and changed her name to “Summer.”  Her first hit, “Love to Love You Baby,” was released in 1975.  The song that won her titles such as “First Lady of Love” and “Queen of Sex-Rock.” She had difficulty recording the single until her producer turned all the lights in the studio off and she lay on her back and delivered the performance. It became popular in the United States, where she became recognized as a sex goddess. Her reputation disturbed her to the point that she attempted suicide in 1976, but soon got help and reconnected with her Christian faith in 1979.

Summer was a versatile performer, and won Grammys in multiple genres, including gospel and rock. She starred in Thank God It’s Friday (1978), her film debut, as a performer. She also recorded “Heaven Knows” with Brooklyn Dreams in 1979, and a year later, married Bruce Sudano, co-founder of the band. Her success declined by the mid-1980s, amid a scandal in which Summer had reportedly made negative comments regarding gay fans, though she denied it. Nonetheless, she lost a significant portion of her fan base because of it.

In 2003, Summer and Marc Eliot released Ordinary Girl: The Journey, which was her autobiography. She performed at the Nobel Peace Prize ceremony for former President Barack Obama in 2009. In 2018, Summer: The Donna Summer Musical debuted on Broadway.

Summer has been honored in a number of ways, including an induction to the Hollywood Walk of Fame. Donna Summer died at home due to cancer on May 17, 2012. She was 63 and was survived by her husband, a brother and four sisters, and her three daughters, Brooklyn Sudano, Amanda Sudano, and Mimi Dohler.