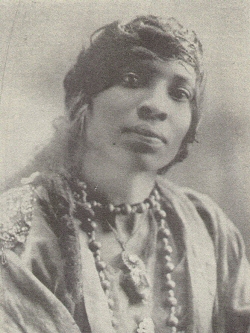 Madame Sul-Te-Wan was born on September 12, 1873 as Nellie Conley in Louisville, Kentucky where her widowed mother worked as a laundress.  Madame Sul-Te-Wan was a pioneering stage and film actress who became one of the most prominent black performers in Hollywood during the silent film era.  Her career spanned more than seventy years and she is best known as the first African American actress contracted to appear in D.W. Griffith’s groundbreaking and racist cinematic epic, Birth of a Nation (1915).

Madame Sul-Te-Wan’s interest in performing was awakened when she delivered laundry to Louisville’s Buckingham Theater where the white actresses who were her mother’s customers often invited young Nellie in to watch the shows.  Two white actresses, Mary Anderson and Fanny Davenport, wrangled an audition for her at a talent contest at the Buckingham which the youngster won.  Moving to Cincinnati, Ohio with her mother, Madame Sul-Te-Wan worked in dance troupes and theater companies throughout the East and Midwest billed as “Creole Nell.” She later formed her own musical performing company, The Black Four Hundred. She reconstituted the group as the Rair Back Minstrels and toured the East Coast to great acclaim.

Madame Sul-Te-Wan married in 1910, gave birth to three sons, and moved her family to Arcadia, California where she hoped to break into California’s burgeoning film industry.  Within two years of arriving in California, her husband deserted the family, leaving them destitute.  Madame Sul-Te-Wan accepted charitable assistance and worked as a domestic in between stints as a singer and dancer in Southern California.  In 1915, on learning that D.W. Griffith, a native of her hometown, was making a movie about the antebellum South and Reconstruction, the actress personally plead her case to the filmmaker and won a part in the cast of Birth of a Nation.  Most of her role however, like that of the other black actors in the film, was deleted from the final cut.  When the film was complete, Madam Sul-Te-Wan was discharged from Griffiths’ film company for “allegedly stealing a book from a white actress and inciting blacks to protest the film’s showing in the Los Angeles area.”  Hiring prominent African American attorney E. Burton Ceruti, she successfully defended herself against the charges and was reinstated in the company.  She continued to work in film until her death at the Motion Picture Country Home in Woodland Hills on February 1, 1959.