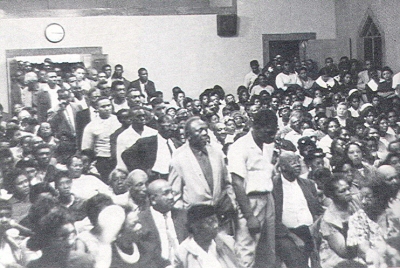 On February 1, 1960, four black college students in Greensboro, North Carolina, demanded service at a Woolworth’s lunch counter. When the staff refused to serve them, they stayed until the store closed. In the following days and weeks this “sit-in” idea spread through the South.  At first several hundred and then several thousand students participated in protest against this form of segregation.

To support and coordinate this spontaneous movement, Ella Baker, a National Association for the Advancement of Colored People (NAACP) official, called a conference at Shaw University in Raleigh, North Carolina from April 16 to 18, 1960. It was there that the Student Nonviolent Coordinating Committee (SNCC) was founded.  Its first chairman was Nashville, Tennessee college student and political activist Marion Berry.

Although SNCC, or ‘Snick’ as it became known, continued its efforts to desegregate lunch counters through nonviolent confrontations, it had only modest success.  In May 1961, SNCC expanded its focus to support local efforts in voter registration as well as public accommodations desegregation.

The high point of its efforts came in 1964 with the Mississippi Summer Project which became popularly known as “Freedom Summer.”  Hundreds of black and white college student volunteers joined Mississippi SNCC workers and local civil rights activists in a bold campaign to register thousands of black voters across the state for the first time. The effort drew national attention particularly when three SNCC workers, James E. Chaney of Mississippi, and Michael H. Schwerner and Andrew Goodman of New York, were killed by white supremacists.

During the fall and winter of 1964/65, SNCC went through a period of internal upheaval, becoming more radical and increasingly anti-white. One result of this development was the replacement of chairman John Lewis by Stokely Carmichael in May 1966. Soon white activists began to leave SNCC.

This trend increased when Hubert “Rap” Brown, a radical and controversial advocate for black armed self-defense, became leader of SNCC in May 1967. One year later, Rap Brown led SNCC into a public alliance with the Black Panther Party.

Although this alliance lasted only until July 1969, the damage done was irreparable. With the expulsion of whites, SNCC’s annual income dropped sharply. Local direct action grassroots projects were scaled back.  By 1970, SNCC had lost all of its 130 or so employees and most of its branches. Finally, in December 1973, SNCC ceased to exist as an organization.