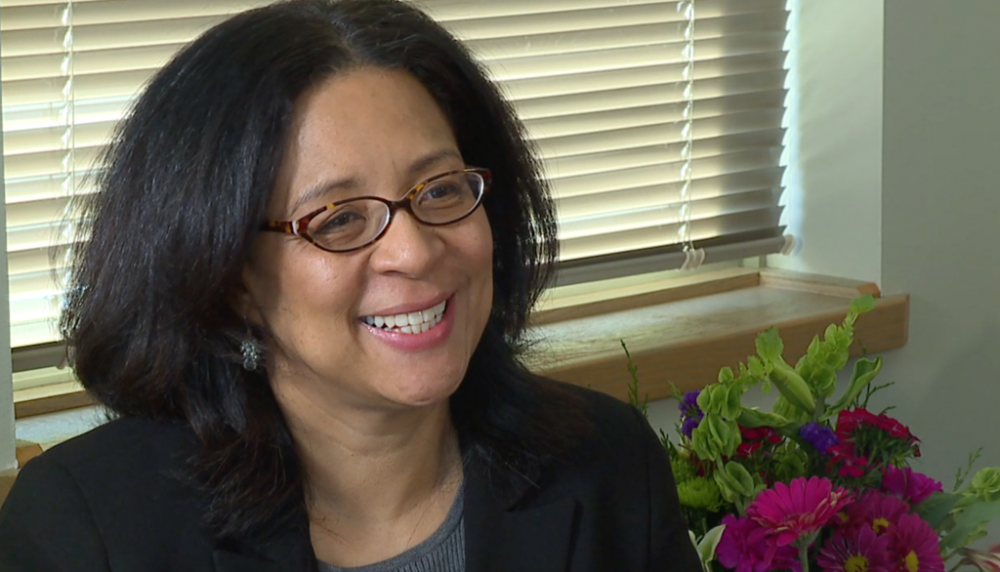 On November 3, 2020, Marilyn  Strickland won the open seat in Washington’s 10th Congressional District, becoming the first Black Representative from the state of Washington, and first woman of Korean American descent elected to Congress.  Previously on November 3, 2009, Marilyn Strickland was elected Tacoma, Washington’s 38th mayor, the second African American mayor of the city, and the first Black woman to hold the post.

Strickland was born on September 25, 1962, in Seoul, South Korea, the only child of Willie and Inmin Kim Strickland. When Marilyn was a year old, Army Spec/5 Willie Strickland was transferred to Fort Lee, Virginia where Inmin Kim experienced for the first time the harsh reality of the segregated South. The family was later stationed in Alaska, and after Willie retired from the service, they settled in Tacoma in 1967.  They chose the city partly because Willie Strickland had been stationed at nearby Fort Lewis during World War II.

Marilyn Strickland grew up in Tacoma’s blue-collar South End and attended Mount Tahoma where she was a cheerleader.  After graduating in 1980, she attended the University of Washington, Seattle where she majored in sociology.  After graduation, she worked briefly in Seattle and then moved to Atlanta, Georgia. After living there for three years, she entered the MBA program at Clark Atlanta University and successfully completed a degree in marketing and communications.

At the time, Strickland foresaw a career on the East Coast, but when corporate positions proved difficult to obtain, she returned, a bit reluctantly, to the Northwest. She accepted a position with Starbucks in Seattle, but she left in 1994 to accept a position with Tacoma’s JayRay Communications firm.

Former Tacoma Mayor Brian Ebersole convinced Strickland to run for an open seat on the city council in 2007. Despite being dismissed as an underdog in the contest, she finished first in the primary election and then won the general in a landslide.

Two years later in 2009, she entered the race for Tacoma mayor and bested a well-known candidate, architect Jim Merritt. It was a close election with the outcome determined by the votes that came from her South Tacoma neighborhood. At age 47, Strickland was elected the 38th mayor of Tacoma.

Mayor Strickland decided early in her tenure that Tacoma needed to position itself on the regional, national, and international stage to promote private investment.  As a result, she traveled extensively in East Asia to encourage successful business deals leading to hundreds of millions of dollars in economic development projects in Tacoma.

Because of her success in bringing investment and jobs to her city, Strickland was elected to her second term unopposed.  This was only the second election in Tacoma’s history where the mayor ran unopposed. In 2015, her many Asian trips paid off when she convinced Xi Jinping, the President of China, to visit Tacoma in 2015.  Mayor Strickland hosted the Chinese leader in a ceremony at Tacoma’s Lincoln High School that was viewed on 375 million television sets in China courtesy of CCTV, the Chinese state TV network.

Mayor Strickland, who was prohibited by city charter from running for a third term, left office in 2017.  Her accomplishments — in addition to increased investment in and international trade for the city — include a 30 percent increase in local high school graduation rates and the passage of her two successful $325 million-dollar transportation revenue ballot propositions, which created the largest city street infrastructure improvement program in 41 years.

Former Mayor Strickland lives in Tacoma and has worked as president and CEO of the Metropolitan Seattle Chamber of Commerce.  She is married to Patrick Erwin, a high school principal. As the newly-elected 10th Congressional District Representative to Congress, she will be sworn in January 2021.