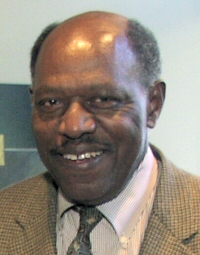 Mel Streeter was born in Riverside, California in 1931. He attended the University of Oregon on a basketball scholarship and was the second African-American basketball player at Oregon after declining an offer by legendary basketball coach John Wooden to attend UCLA, because UCLA did not have an architecture program. Streeter graduated with a bachelor’s degree in architecture in 1955.

At the University of Oregon, Streeter was enrolled in the United States Army ROTC program. After serving as a second lieutenant in the transport unit at Ft. Lawton, Washington from 1955 to 1957,  he stayed in Seattle to raise a family and tried finding work at local architectural firms. He struck out 22 times before he finally found work with Paul Hayden Kirk and Fred Bassetti.

In 1967, Streeter opened the third black-owned architecture firm in Seattle. In the 1970s, he teamed with Paul Dermanis to form Streeter/Dermanis. By the early 1990s, the two partners had split and Streeter created Streeter & Associates Architects. The firm is known for projects such as Auburn City Hall, the Federal Aviation Administration Regional Headquarters and several buildings at Naval Station Everett in Everett, Washington.

Some of the firm’s community facilities include John Muir Elementary School, the Rainier Beach High School Performance Hall and the African American Academy. He also designed a 64-unit senior housing complex for Mount Zion Baptist Church and was part of the Safeco Field, Qwest Stadium, and SeaTac airport design teams.

A pillar of the black community in Seattle, he was a Seattle Planning Commissioner. He was a founding member of the AIA Seattle Diversity Roundtable and the Tabor 100. He was active in the professional black men’s organization, the Breakfast Group. As a black architect, Streeter opened doors for other architects of color and some of the city’s best known architects.