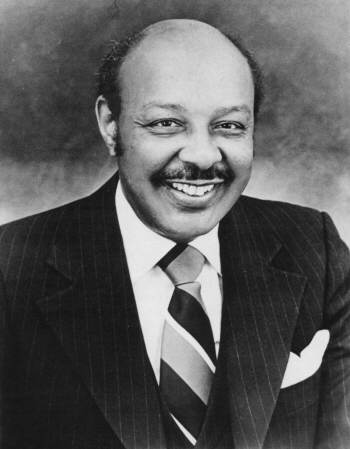 Ohio’s first African American Congressman, Louis C. Stokes was born to Charles and Lois Stokes on February 23, 1925 in Cleveland, Ohio, where he attended its public schools before joining the United States Army in 1943. Stokes served in the army for three years and then attended Western Reserve University from 1946 to 1948 where he earned a B.A.  In 1953 he received a Doctor of Law degree from Cleveland Marshall Law School of the Cleveland State University. Stokes was admitted to the Ohio bar the same year and began practicing law in Cleveland.

Louis Stokes became active in the civil rights movement and political affairs in the 1960s. He became a member of the executive committee of the Cuyahoga County Democratic Party and was also a member of the American Civil Liberties Union.  Stokes served as vice president of the Cleveland branch of the National Association for the Advancement of Colored People (NAACP) in 1965-66, and as chairman of its Legal Redress Committee for five years.

Following a lawsuit argued by Stokes on behalf of Republican leader Charles P. Lucas, the United States Supreme Court ruled in December 1967 that the Ohio legislature had to adopt a congressional redistricting plan that accurately reflected the presence of black voters. A new district, the Twenty-First, was subsequently created, and Stokes won the Democratic nomination over a field of twenty opponents in the May 1968 primary. He defeated Lucas in the general election and became the first black Congressman from Ohio, taking office on January 3, 1969.

Stokes served on the Education and Labor Committee and on the House Un-American Activities Committee (renamed the House Internal Security Committee in 1969). In 1971 Stokes was elected to the Appropriations Committee, becoming the first black member of Congress to join the panel. When the House Budget Committee was formed in 1974, Stokes was among those elected to membership. In 1972, he became chairman of the Congressional Black Caucus and served two consecutive terms.

During his long tenure in Congress, Louis Stokes headed and participated in several major House investigations. In March 1977 he was appointed to lead the Select Committee on Assassinations, formed to conduct an investigation of the circumstances surrounding the deaths of President John F. Kennedy and Dr. Martin Luther King, Jr. The committee concluded its work in December 1978 with twenty-seven volumes of hearings and a final report containing recommendations for administrative and legislative reform, but did not conclusively point to a conspiracy in either case.

When Louis Stokes retired in 1998, he became the first African American in the history of the U.S. Congress to have completed 30 years in office.   Following his service in Congress, he became senior counsel at Squire, Sanders, and Dempsey L.L. P., a global law firm, and Distinguished Visiting professor at the Mandel School of Applied Social Sciences at Case Western Reserve University.   Stokes also served as vice chairman of the PEW Environmental Health Commission at the Johns Hopkins School of Public Health and was appointed by former Health and Human Services Secretary, Donna E. Shalala, as chairman of the Advisory Committee on Minority Health.

Louis Stokes, a member of Sigma Pi Phi Fraternity, died on August 18, 2015 from lung and brain cancer at his home in Cleveland, Ohio. He was 90.