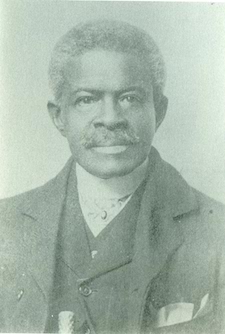 Teacher, author, clergyman, and civil rights leader, Thomas McCants Stewart was born in Charleston, South Carolina on December 28, 1853,  to George Gilchrist and Anna Morris Stewart.  Young Stewart attended the Avery Normal Institute before enrolling in Howard University in 1869. Although only fifteen when he arrived on Howard’s campus, Stewart, nonetheless, distinguished himself as a student and contributed occasional articles to the Washington, D.C. New National Era, an African American newspaper.

Yet Stewart grew increasingly dissatisfied with the quality of instruction at Howard and became one of the first black students to enroll in the University of South Carolina at Columbia in 1874. In December 1875, Stewart graduated with Bachelor of Arts and L.L.B. degrees.

After graduation, Stewart married Charlotte Pearl Harris and taught mathematics at the State Agricultural and Mechanical College in Orangeburg between 1877 and 1878. He also joined the law firm of South Carolina Congressman Robert Brown Elliott. In 1877, Stewart became an ordained minister in the African Methodist Episcopal Church and three years later was appointed pastor of the Bethel AME Church in New York.

In New York, Stewart emerged as a national civil rights leader, respected attorney, and writer. In 1883, however, he migrated to Liberia to serve as a professor at Liberia College. By 1885 Stewart returned to New York and wrote about his African experience in Liberia: The Americo-African Republic (1886).

Restless, Stewart relocated to Hawaii in 1898. There, he hoped to advance his legal practice. After achieving little success, he moved to London, England in 1905, and in 1911 returned to Liberia, where he was appointed an Associate Justice of the Liberian Supreme Court. His criticism of Liberia’s president resulted in his removal from the court in 1914.

Stewart returned to London, where he hoped to live out the remaining years of his life, but in 1921 he moved to the Virgin Islands, a newly acquired United States territory. Regarded as an elder statesman, Stewart established a legal practice with Christopher Payne, one of the island’s most experienced attorneys. Stewart died in St. Thomas, Virgin Islands on January 7, 1923.