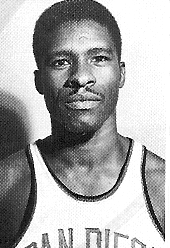 Olympic athlete Willie Samuel Steele was born in El Centro, California on July 14, 1923.  At age 4 his family moved to San Diego where he graduated from Herbert Hoover High School in 1940.  While attending San Jose State University he was drafted into the U.S. Army and became a decorated veteran of World War, II having served in the invasion of Italy.  Returning to San Diego, in 1946 he entered San Diego State University (then San Diego State College) where he played basketball, football, and as a track star won two NCAA and one AAU broad jump championships in the late 1940s.

Steele’s crowning achievement occurred in the 1948 Olympic Games in London where, despite an injured leg, he won a gold medal in the broad jump with a leap of 25 feet 8 inches.  In the wake of his Olympic triumph the 1949 school yearbook was dedicated to Steele.  That same year he signed a contract to play halfback for the Los Angeles Rams but only performed in some exhibition games before being cut from the team.

Soft-spoken and unpretentious, Steele was the epitome of the student-athlete and he was a popular speaker at social and civic functions.  He was inducted into the Hall of Champions in San Diego’s Balboa Park.  Steele found steady employment in Oakland, California as a director in the city’s Parks and Recreation Department.  A year after he retired Steele died of cancer on September 19, 1989.