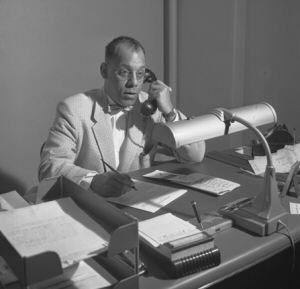 Born in 1920 in Hopkinton, Massachusetts, Percy Steele was one of eight children. Steele graduated from North Carolina Central College in Durham, North Carolina, after which he attended Atlanta University, where he completed a Master’s degree. From 1945 to 1946, he was a staff member and organization secretary for the Washington, D.C. Urban League.

Steele was regarded as one of the major civil rights leaders in San Diego, a position that he also earned during his long tenure (1964-1990) as executive director of the Bay Area Urban League. A committed consensus builder who worked with people of all racial and ethnic backgrounds, Steele was also highly regarded in his profession. He was recognized for his outstanding work by the national Association of Social Workers, the National Association of Black Social Workers, and the Council of Executives of the National Urban League.  Steele, a member of Sigma Pi Phi fraternity, died in San Francisco on March 26, 2002. He was 82.