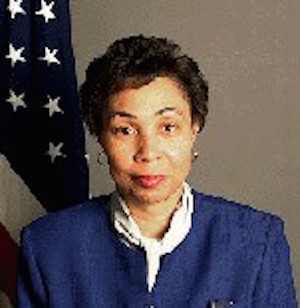 Sylvia Stanfield, a career member of the Senior Foreign Service with the rank of Minister-Counselor, took up her post as U.S. Ambassador Extraordinary and Plenipotentiary of the United States of America to Brunei in November 1999. President William J. Clinton appointed Ambassador Stanfield to the post.  She began her assignment on September 9, 1999.

Brunei, officially the State of Brunei Darussalam, is a sultanate (pop. 295,000), in northwest Borneo, in two coastal enclaves surrounded by Malaysia. A British protectorate after 1888, Brunei was granted self-government in 1971 and became independent in 1984.

Ambassador Stanfield was born on October 28, 1943, in Houston, Texas. She earned a B.A. degree from Western College for Women in Oxford, Ohio in 1965. As an East-West Center grantee, she received an M.A. degree in Asian Studies from the University of Hawaii and continued her studies at the University of Hong Kong School of Oriental Studies and Linguistics in 1966-1967.

Joining the United States Department of State in 1968, her primary area of specialization has been Asian Affairs. Her first overseas assignment was as Vice Consul with the then American Embassy in Taipei, Taiwan. While there she engaged in advanced language study at the Department of State School for Chinese Language and Area Studies in Taiwan.

Other overseas assignments have included her serving as a political officer with the U.S. Consulate General in Hong Kong and the U.S. Embassy in Beijing, China. Ambassador Stanfield has also served as a Watch Officer in the Department of State Operations Center, as a political and economic/commercial officer in the Office of the Peoples Republic of China and Mongolian Affairs, and with the American Institute in Taiwan, Taipei Office.  She was also Director of the Office of Taiwan Coordination Affairs.

Ambassador Stanfield has also been an Inspector with the Office of the Inspector General and served as an Examiner with the Board of Examiners of the Foreign Service. From 1990 to 1993, she was Deputy Chief of Mission of the U.S. Embassy in Wellington, New Zealand and Charge d’Affaires at the U.S. Embassy in Canberra, Australia.

Selected to attend the Department of State’s Senior Seminar, Ambassador Stanfield is a member of the forty-first class, 1998-1999.

After her ambassadorship ended in September 2002, Ambassador Stanfield became a Diplomat in Residence at Florida A&M University and at Spelman College in Georgia. She is on the executive committee of the Association of Black American Ambassadors (ABAA).  In August 2014 she was selected interim President of Association of Black Professionals in International Affairs (BPIA).  She is a President of the Western College Alumnae Association and a member of the Miami University (Ohio) Foundation Board.