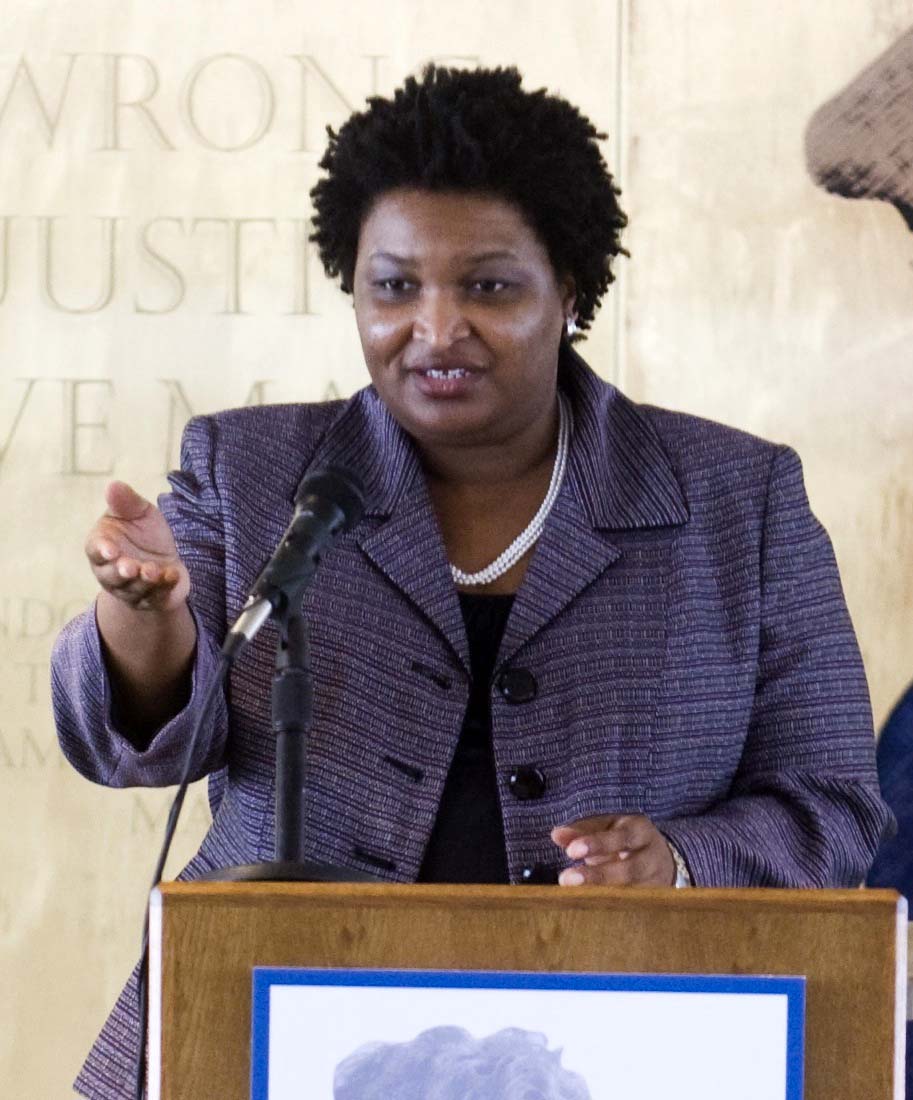 Abrams was born on December 9, 1973 to Reverend Robert (former dockworker) and Reverend Carolyn Abrams (former librarian), in Madison, Wisconsin. The family spent time in Gulfport, Mississippi, before moving to Atlanta, Georgia, where Abrams attended Avondale High School, a performing arts school. In her junior year, she was selected for a Telluride Association Summer Program, which led to her being hired at age seventeen as a typist for a congressional campaign and a speechwriter. She graduated as the valedictorian from Avondale and then matriculated at Spelman College, graduating magna cum laude in 1995 with her B.A. in interdisciplinary studies (political science, economics and sociology). In 1998, she earned a master’s of public affairs from the LBJ School of Public Affairs at the University of Texas at Austin, where she was as a Harry S. Truman Scholar. She earned a  J.D. from Yale Law School in 1999.

Abrams returned to Atlanta after law school and worked as a tax attorney at the Sutherland, Asbill & Brennan law firm. In 2002, at the age of 29, Abrams was appointed the Deputy City Attorney for the City of Atlanta, leading a team of more than twenty attorneys and paralegals. Abrams was elected to the Georgia General Assembly in 2007, representing House District 84 and then House District 89, and serving on the Appropriations, Ethics, Judiciary Non-Civil, Rules and Ways & Means committees. In 2011, Abrams became the Minority Leader, making her the first African American Minority Leader of the Georgia House of Representatives.

While a member of the General Assembly, Abrams co-founded and served as senior vice-president  of NOW Corp, a financial services firm; co-founded Nourish, a beverage company focused on infants and toddlers; was CEO of Sage Works, a legal consulting firm; and founded the New Georgia Project in 2013, which submitted more than 200,000 voter registrations between 2014 and 2016. Abrams resigned in August of 2017 to focus on her gubernatorial campaign.

In 2018, Abrams won the Democratic nomination for governor of Georgia, making her the first African American woman in the United States to be a major party nominee for that office. Abrams ran against Republican Brian Kemp, who was then the Georgia secretary of state. She lost the race 49 percent to 50 percent but refused to concede amid voter suppression concerns. When she ended her campaign, Abrams launched an organization called Fair Fight Action to challenge Georgia’s entire electoral system.

Abrams is an award-winning author of eight romance suspense novels under the pen name Selena Montgomery. Under her own name, she released Minority Leader: How to Lead from the Outside and Make Real Change in April 2018. Abrams has garnered recognition from numerous organizations, including the Georgia Hispanic Chamber of Commerce and the National Urban League. In 2012, she received the Friend of Labor Award. Abrams is the recipient of the inaugural Gabrielle Giffords Rising Star Award and a lifetime member of the Council on Foreign Affairs. Her siblings include Dr. Andrea Abrams, Dr. Jeanine Abrams, and Federal Judge Leslie Abrams Gardner.

Rebecca Traister, “Stacey Abrams for Governor? Senator? Veep? President?!The Georgian who is usually sure about everything finds herself conflicted about her future,” Thecut.com, March 2019, https://www.thecut.com/2019/03/stacey-abrams-whats-next.html; Tom Barry, “License To Thrill; Stacey Abrams’ life is Action Packed! And Spine Tingling! Even without the spy novels she writes”, Superlawyers.com, October 2006, https://www.superlawyers.com/georgia/article/license-to-thrill/7c9bcac0-0b49-49bb-a49a-96af01ddd184.html; Jack Mandela, “Stacey Abrams; First Black Woman To Win Democratic Gubernatorial Primary; Will She Be The Next Georgia’s Governor?”, Celebsblurb.com, May 24, 2018, https://celebsblurb.com/stacey-abrams-bio-wiki-married-family-boyfriend/.