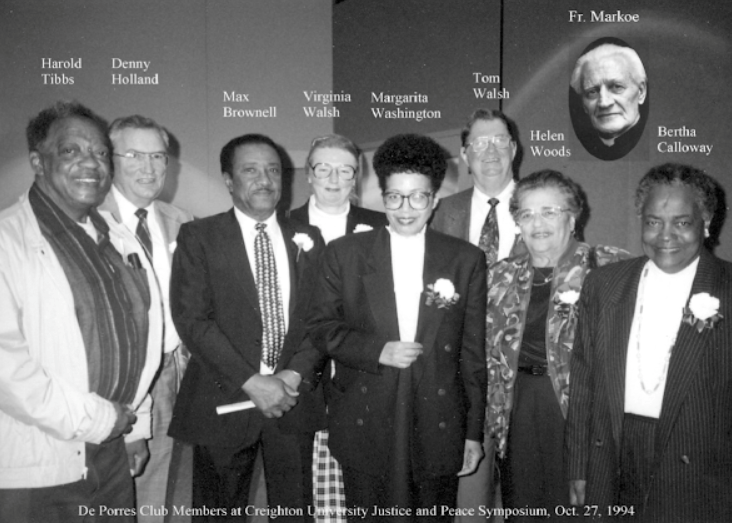 While the local Catholic Church hierarchy saw the role of St. Benedict primarily to “to lead [black] people to Christ,” Father Markoe focused on white racism which he felt was the major problem facing his parishioners and predominantly black North Omaha.  Naming the club after an early 17th Century Afro-Peruvian priest who dedicated his life to helping the poor of Lima, Markoe and the university students of the De Porres Club used various tactics such as boycotts and picketing to challenge residential segregation and job discrimination more than a decade before similar tactics would be employed by Southern civil rights activists.

By the fall of 1948, the Club’s civil rights activities were well known and respected in black North Omaha.  As club membership grew, Markoe petitioned the Church to provide a regular meeting location.  The De Porres Center opened at 1914 N. 24th Street and was fully operational by the following summer.  Beverly Hovendick, the De Porres Center’s first Director, led a half dozen full-time staff and many more volunteers.  Paid staff members were required to live near the Center, and the sole qualification for volunteers was to devote “time and energy toward eliminating Jim Crow from Omaha.”  The De Porres Center offered a lending library and sponsored a guest lecture series geared toward developing innovative approaches for ending racial segregation and oppression.

In April 1949, the Club held a series of interracial youth rallies at Omaha’s Technical High School where ideas for direct action protests were generated.  The Club’s first major campaign in 1949 involved a boycott and pickets of city busses.  Later protests were directed at the Coca-Cola Bottling Company and Reid’s Ice Cream, which refused to hire blacks, and Cross-town Skating Rink and the Safeway Cab Company which banned African American customers.  All of these protest campaigns were successful.

Club activities continued throughout the 1950s.  In the summer of 1959, for example, Club President Wilbur Phillips, and six members demonstrated outside of the Omaha Board of Education headquarters,  protesting the board’s policy of refusing to hire black teachers in the city’s public schools.

Considered a radical organization in its day, the De Porres Club led desegregation efforts in Omaha up to 1960.   The Center remains a hub for human rights activities in Omaha today.